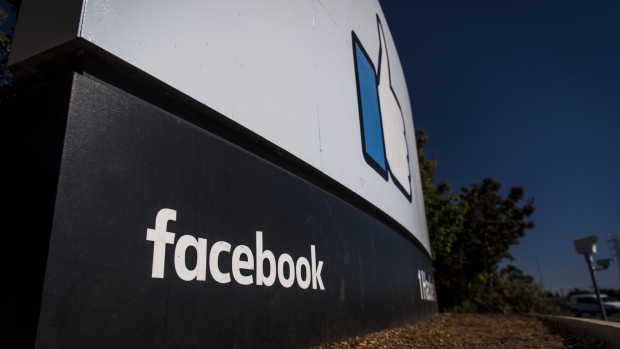 Signage is displayed outside Facebook Inc. headquarters in Menlo Park, California, U.S., on Tuesday, Oct. 30, 2018. Facebook Inc., which had warned of rising costs and slowing growth, reported quarterly revenue roughly in line with expectations and profit that beat analysts' forecasts. And despite scandals around fake news and election interference, it added more users, too. Photographer: David Paul Morris/Bloomberg , Bloomberg

(Bloomberg) -- Facebook Inc. has reached a settlement with the U.S. government over allegations that it discriminated against domestic workers by reserving thousands of positions for foreigners with temporary H-1B visas.

Facebook agreed to pay as much as $14.3 million in separate settlement agreements with the Justice and Labor Departments, the government said Tuesday.

“Facebook is not above the law, and must comply with our nation’s federal civil rights laws, which prohibit discriminatory recruitment and hiring practices,” said Assistant Attorney General Kristen Clarke of the Justice Department’s Civil Rights Division.

Facebook effectively discouraged Americans from applying for certain positions in the company, saving those for foreign holders of H-1B visas, the Justice and Labor Department officials said during a briefing with reporters.

The social media company agreed to a penalty of $4.75 million and to make another another $9.5 million available to victims of the company’s discrimination, the Justice Department said. “This settlement reflects the civil rights division’s commitment to holding employers accountable,” said Clarke.

The Justice Department filed a lawsuit against Facebook in December, saying the company “refused to recruit, consider, or hire qualified and available U.S. workers for over 2,600 positions” and instead reserved the jobs -- with an average salary of $156,000 -- to non-citizens that it sponsored for permanent work authorizations with green cards.