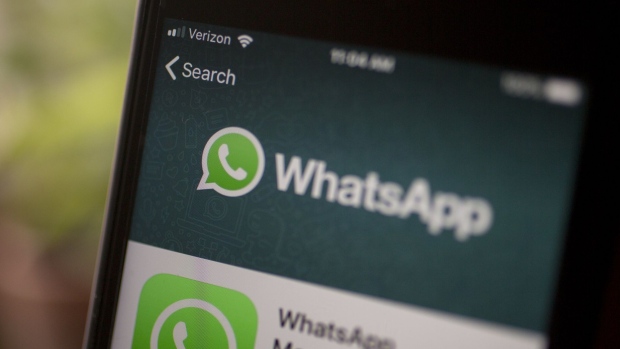 The Facebook Inc. WhatsApp application is displayed in the App Store on an Apple Inc. iPhone in an arranged photograph taken in Arlington, Virginia, U.S. on Monday, April 29, 2019. Facebook paid out a $123 million fine to EU antitrust regulators for failing to provide accurate information during their review of Facebook's WhatsApp takeover. Photographer: Andrew Harrer/Bloomberg , Bloomberg

(Bloomberg) -- Facebook Inc. prevailed in a lawsuit accusing NSO Group of exploiting WhatsApp services for mass surveillance after the Israeli spyware manufacturer didn’t show up in U.S. court to contest the allegations.

A default judgment was entered Monday in San Francisco federal court after Facebook told a judge that it made ample efforts -- all unanswered -- to give NSO Group notice of the suit and a chance to respond.

“WhatsApp prematurely moved for default before properly serving NSO Group with the lawsuit,” a spokesman for the Israeli company said in a statement. “As NSO Group has not been formally served, this default notice will not stand. We cannot comment further about this ongoing matter.”

Facebook alleged in October that NSO Group created WhatsApp accounts that it used to send malware and hack into the mobile phones of 1,400 people. Using phone numbers in different countries to create bogus accounts on the messaging app, NSO Group targeted attorneys, journalists, human rights activists, political dissidents, diplomats and other senior foreign government officials, according to the complaint.

NSO Group, which makes mobile device surveillance software, disputed the allegations and said at the time it would “vigorously fight them.”

“The sole purpose of NSO is to provide technology to licensed government intelligence and law enforcement agencies to help them fight terrorism and serious crime,” the company said in an October statement. “Our technology is not designed or licensed for use against human rights activists and journalists. It has helped to save thousands of lives over recent years.”

A WhatsApp spokesperson said NSO has chosen not to defend its actions in court.

“NSO Group conducted cyber attacks against WhatsApp and its users, including human rights activists, journalists, and diplomats, in violation of U.S. law,” the spokesperson said in a statement. “The dangerous proliferation of hacking tools sold and operated by NSO Group pose a clear threat to the safety of users everywhere and we will continue to pursue swift accountability from the courts in the U.S. “

To contact the reporters on this story: Robert Burnson in San Francisco at rburnson@bloomberg.net;William Turton in New York at wturton1@bloomberg.net

To contact the editors responsible for this story: David Glovin at dglovin@bloomberg.net, Peter Blumberg, Joe Schneider