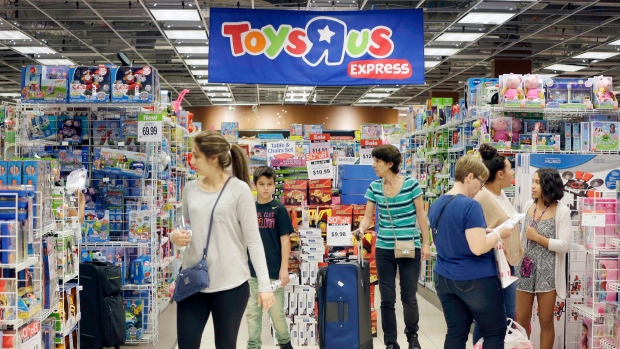 TORONTO -- Fairfax Financial Holdings' president says its plans for Toys "R" Us are not limited to Canada, as it is exploring options to keep a foothold in the U.S.

Paul Rivett says the Toronto-based company, whose $300-million stalking horse offer for the Canadian subsidiary of the toy retailer was approved in a U.S. court this week, is looking at pods of stores in the U.S. it can potentially invest in.

The acquisition by Fairfax ends the uncertainty looming over Toys "R" Us Canada after it filed for creditor protection in September, and its U.S. division sought bankruptcy protection.

Rivett says during an interview after Fairfax's annual general meeting of shareholders today that the sale has not yet received court approval north of the border.

He says Toys "R" Us Canada is profitable, but also comes with real estate assets which Fairfax estimates are worth as much as the $300 million price-tag.

He adds that Fairfax brought in a third-party to assess the Canadian subsidiary's stores, and several located in high-density locations are undervalued.