Interest rates at this level are unsustainable: BMO head of fixed income

U.S. consumer sentiment unexpectedly declined to a five-month low in early July as mounting concerns over rising prices led to a sharp deterioration in buying conditions for big-ticket items.

The University of Michigan’s preliminary sentiment index decreased to 80.8 in July from 85.5 the prior month, data released Friday showed. The figure was lower than all estimates in a Bloomberg survey which had a median projection of 86.5.

Consumers expect inflation to rise 4.8 per cent over the next year, the highest since August 2008. At the same time, they were more sanguine about longer-term prospects for prices. The expected inflation rate over the next five to 10 years crept up to 2.9 per cent from 2.8 per cent last month 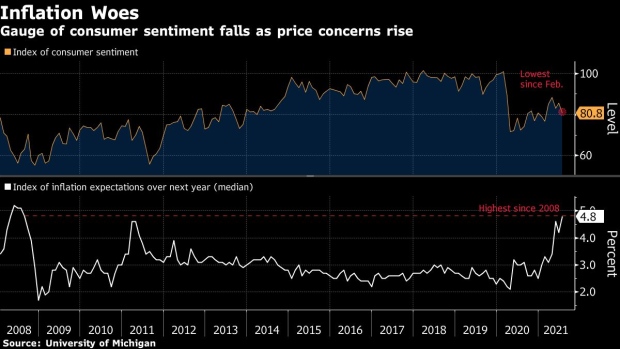 “Consumers’ complaints about rising prices on homes, vehicles, and household durables” reached an all-time record, Curtin said. The university’s measure of buying plans for durables fell to 101 in early July, the lowest since April 2020 during the height of the pandemic.

Buying attitudes for vehicles and homes shrank to their lowest point since 1982, the report showed. Just 30 per cent of all consumers cited favorable home buying conditions, the lowest level since September 1982.

The gauge of current conditions dropped to 84.5 in July, the lowest since August, from 88.6. The university’s measure of expectations decreased to a five-month low of 78.4 from 83.5.

Despite concerns about higher prices, leisure-related spending is likely to rise as more Americans resume travel during the crucial summer season.