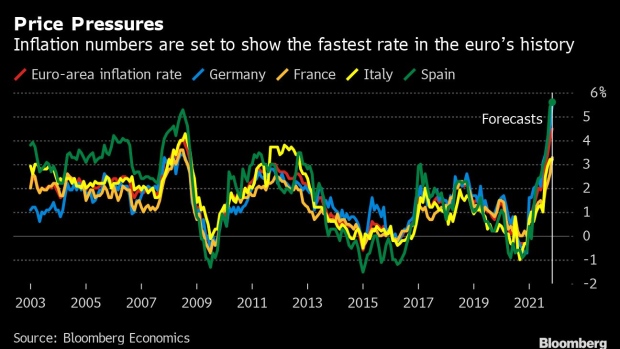 (Bloomberg) -- The euro zone is now enduring the fastest inflation since the single currency was founded at the end of the 20th century, economists say.

Consumer prices in the 19-country region rose 4.5% in November, according to the median of 40 estimates in a Bloomberg survey before the statistics due Tuesday. Every respondent predicts an acceleration from last month’s level of 4.1%, which already matched the fastest since the 2008 financial crisis.

In Germany, the region’s biggest economy, the cost-of-living squeeze is arguably even greater, with the median estimate for inflation data on Monday now at 5.5%. The Bundesbank warned this week that the outcome there could even reach close to 6%.

Such unprecedented price spikes, reflecting surging energy costs and global supply bottlenecks, will add to the communication challenge of the European Central Bank, whose policy makers soon face a major decision on the future of stimulus. They insist this bout of inflation is transitory, while underlying pressures remain too weak to be self-sustaining.

“We don’t expect it to alter the European Central Bank’s assessment of underlying price pressures before its December meeting,” Maeva Cousin, an economist at Bloomberg Economics, said in a report Friday previewing the data. “Underlying pressures are likely to remain more stable.”

A core measure of prices that strips out volatile items such as energy and food is also jumping. The outcome of 2.3% median prediction for that would be the highest since 2002.

The highest prediction for headline euro-zone inflation in the survey is by Capital Economics, whose economists expect 4.7%. The lowest is 4.2%, anticipated by six forecasters including Bank of America.