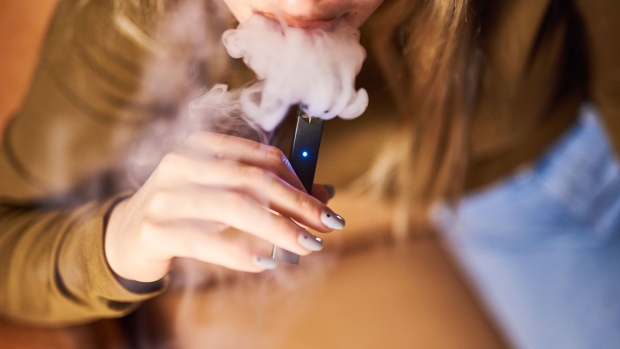 (Bloomberg) -- The head of the U.S. Food and Drug Administration suggested at a congressional hearing that e-cigarette maker Juul Labs Inc. has played a significant role in creating a youth vaping epidemic.

Acting FDA Commissioner Janet Woodcock was asked at a Wednesday hearing of the House Oversight Subcommittee on Economic and Consumer Policy if Juul was “the e-cigarette company most responsible for creating this epidemic.”

She answered that it does “appear” to be the case. The meeting opened with the subcommittee’s chairman, Democrat Raja Krishnamoorthi of Illinois, urging the FDA to deny approval for all vaping companies in the agency’s ongoing review of their products.

Juul is one of hundreds of e-cigarette makers that is seeking the FDA’s permission to continue to sell its products. Those marketed since February 2007 have had to submit applications to the FDA in order to stay on the market. The agency has a Sept. 9 deadline to make a ruling.

Approval is based on the FDA finding a product is “appropriate for the protection of the public health,” which requires makers to demonstrate that their products won’t promote youth use, but instead will help adults quit smoking.

At the hearing, Representative Katie Porter, a Democrat from California, said only about 4.5% of adults smoked e-cigarettes in 2019, compared with more than 20% of middle and high school students that still use e-cigarettes today.

Juul has been accused of marketing its products to youths, a charge the company denies. The company declined to comment on Wednesday’s hearing, but it has said in the past that it has provided the FDA with data from over 110 studies involving their applications.

Neither Juul nor the FDA have commented on the company’s status in the application process. Woodcock said Wednesday that the agency is prioritizing products from “about five” e-cigarette companies that account for large portions of the market, but did not name the companies.

Documents released by the subcommittee Wednesday include consumer feedback from 2018 accusing Juul of “getting people addicted to nicotine without them realizing.” Juul was also urged by adults as early as 2016 to lower the 5% nicotine level in their products.

That didn’t come about until 2018, when the nicotine level was lowered to 3% after the FDA pressured the company to make the change.

In response to a question by Krishnamoorthi, Woodcock said it’s her view that menthol has properties that heightens addiction. The debate isn’t exactly closed on the issue, she added, but based on what she’s heard that’s what she believes.

Woodcock also testified that the question of addiction is “at the forefront” of the agency’s deliberations.

Senator Dick Durbin, a Democrat from Illinois, also testified at the hearing. He said he has a personal interest in the issue because his father, a smoker, had died of lung cancer.

Durbin called Juul’s marketing abusive. He also criticized the FDA for “leaving major loopholes” for e-cigarette makers, and urged them to crack down on both disposable e-cigarettes and flavored products.