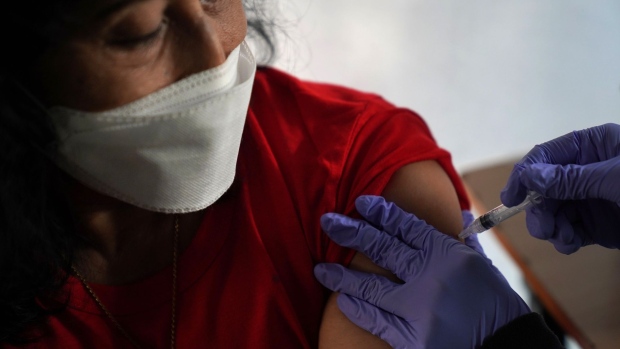 An elderly resident receives a dose of the Pfizer-BioNTech Covid-19 vaccine at a health center in Jakarta, Indonesia, on Thursday, Jan. 13, 2022. Indonesia is prioritizing elderly and at-risk people to receive booster shots in a program started on Wednesday. , Bloomberg

(Bloomberg) -- Pfizer Inc. and BioNTech SE said a pair of studies confirmed that three doses of their Covid-19 vaccine produce antibodies that can neutralize the omicron variant. U.S. regulators restricted the use of a pair of monoclonal antibody therapies that are seen as ineffective against omicron.

Beijing eased a testing requirement for the Winter Olympics even as a growing number of cases associated with the games are being found. Athletes are using chartered flights to get to China safely.

The World Health Organization said Europe is entering a more stable phase of the pandemic, driven by omicron’s milder symptoms, lower risk of hospitalization and the efficacy of vaccines. The U.K. will stop requiring vaccinated travelers to take a Covid-19 test after arriving in England, Prime Minister Boris Johnson said.

New South Wales, Australia’s most-populous state, extended Covid-19 restrictions by a month. Density limits and a ban on singing and dancing will continue in hospitality venues and masks will remain mandatory in all indoor settings outside the home until Feb. 28.

The move comes as health officials say the current wave of cases in the state is showing signs of peaking, with intensive care cases coming down and hospitalizations plateauing. NSW, home to more than 8.2 million people, had 2,943 Covid-19 hospitalizations and 183 ICU admissions on Tuesday, with 29 deaths.

FDA Halts Use of Treatments Seen as Ineffective (5:30 p.m. NY)

U.S. regulators restricted the use of a pair of Covid-19 monoclonal antibody therapies after scientific evidence suggested they are unlikely to be effective against the omicron variant.

The Food and Drug Administration said in a statement on Monday that it had decided to limit access to the treatments, which are made by Eli Lilly & Co. and Regeneron Pharmaceuticals Inc., amid the recent surge in omicron infections. The variant, which was first detected last year in southern Africa, now accounts for nearly all new cases of Covid-19 in the U.S.

Hospitals in the U.S. are asking Congress to give them another $25 billion and hand out all previously allotted funds to shore up facilities ravaged by the omicron outbreak.

The money would pay for training and extra security as hospitals cope with staff shortages, higher costs and lost revenue, the American Hospital Association said in a letter to congressional leaders.

The top politician in Canada’s largest oil-producing province said the group is preparing a letter to Biden and Trudeau “urging them to use common sense, and end the policy that has taken thousands of trucks off the road,” according to a post on Twitter showing empty shelves at grocery stores. “This is turning into a crisis. It requires immediate action by the Canadian and U.S. governments.”

Omicron has led to an increasing number of severe cases of Covid-19 among children in New Jersey and has fueled new outbreaks in nursing homes and other long-term facilities, Health Commissioner Judith Persichilli said.

While cases and hospitalizations in the state likely peaked two weeks ago, the number of critically ill patients remains high, Persichilli said. Six children are currently hospitalized with Covid, and there have been four pediatric deaths -- including three infants -- since Christmas, she said. New Jersey has had 12 pediatric deaths from Covid since the pandemic began.

At nursing homes, health-care workers have fallen ill, fueling 560 outbreaks last week -- 10,500 cases among residents and 12,800 among staff, Persichilli said. While 81% of residents at the facilities have received their booster shot, just 44% of staff has gotten the extra shot, she said.

The World Health Organization said Europe is entering a “new phase” of the pandemic. Hans Kluge, WHO’s regional director for the continent, said in a statement that omicron offers “plausible hope for stabilization and normalization” but that it’s “far too early to relax.”

Citing omicron’s milder symptoms, lower risk of hospitalization and the efficacy of vaccines, Kluge said he is still concerned about the number of unvaccinated people across the globe who are “helping to drive transmission.”

He said 2022 must be the “year of vaccine equity in the European Region and beyond.” The WHO’s European region encompasses 53 countries with varying vaccination rates and health-care systems.

Former Alaska Governor Sarah Palin tested positive for Covid just before trial in her defamation suit against the New York Times was set to begin on Monday.

The judge announced Palin’s positive result in court Monday, noting that the 2008 Republican vice presidential nominee was unvacccinated. He said she was due to take another Covid test at 10:15 a.m. If she tests positive again, the trial will be postponed until Feb. 3. If she continues to test positive, it may be months before the trial can be rescheduled, the judge said.

Palin sued the Times over an opinion piece that incorrectly described an ad by her political action committee to connect them to the 2011 shooting of former U.S. Representative Gabby Giffords of Arizona.

The new rules are part of a general easing of Covid-19 restrictions as the U.K. starts to treat the virus as endemic.

“So what we’re doing on travel, to show that this country is open for business, open for travelers, you will see changes so that people arriving no longer have to take tests if they have been vaccinated, if they have been double vaccinated,” Johnson told broadcasters Monday in a pooled interview.

EasyJet CEO Johan Lundgren said in statement that the airline is looking ahead to what it believes “will be a strong summer.”

Pfizer and BioNTech said a pair of laboratory studies confirmed that three doses of their Covid-19 vaccine produce antibodies that can neutralize the omicron variant.

Published in the peer-reviewed journal Science, the studies also indicate that immunity provided by T-cells after two shots of the vaccine may still protect against severe disease.

A third study published on the pre-print server bioRxiv without peer review also showed restoration of antibodies, but indicated that their ability to neutralize omicron decreases by as much as two times over four months.

The partners said they’re now planning human trials of an additional dose of the original shot as well as a vaccine express-designed for the omicron variant.