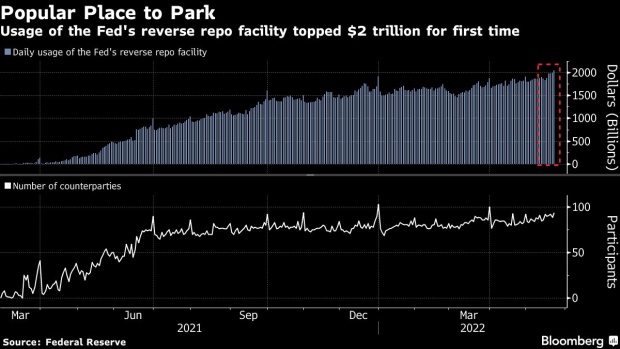 (Bloomberg) -- The amount of money parked at a major Federal Reserve facility climbed to yet another all-time high, surpassing the $2 trillion milestone for the first time, as investors struggled to find places to invest their cash in the short term.

Money-market funds continue piling into the Fed’s overnight reverse repurchase agreement facility, even as the monetary authority raises interest rates and plans to start unwinding its mammoth balance sheet next month, moves intended to tighten financial conditions and drain the amount of excess liquidity in the financial system. Yet there’s still an imbalance in the Treasury-bill market that as of late has been exacerbated by robust tax collections in the US, and as a result the so-called RRP facility remains a haven for money markets with very few investment options.

Even Jamie Dimon, JPMorgan Chase & Co.’s chief executive officer, said at the firm’s investor day Monday that the Fed almost has to do so-called quantitative tightening since there is too much liquidity out there.

On Monday, 94 participants placed a total of $2.045 trillion at the RRP facility, in which counterparties can put cash with the central bank. The previous record, set on Friday, was $1.988 trillion.

“Treasury is still decreasing bill supply and that seems to be driving the market firmly into the arms of the RRP facility as the only place of refuge,” said Gennadiy Goldberg, a senior US interest rates strategist at TD Securities. “The big implication is that with RRP usage remaining high, QT will drain reserves from the system rather quickly at the start of runoff.”

After this week’s Treasury bill settlements, the department will have paid down roughly $372 billion of supply since the beginning of March, data show. Wells Fargo & Co. strategists estimate bill supply should turn slightly positive in the second half of the year, though it won’t be enough to “fill the void for the mountain of dollars looking for a safe and liquid home,” Zachary Griffiths and Michael Pugliese wrote in a note.

Still, Fed officials have said demand for the facility could increase after rate hikes, given that money funds may be quicker to pass on higher interest rates than the banks. That’s because banks tend to boost deposit rates by less, which would spur the flow of cash to money markets.

Once the Fed’s so-called quantitative tightening starts removing liquidity from the financial system, a consensus has emerged among Wall Street strategists that cash will drain faster from bank deposits than from the RRP.

The expectation is related to the tax receipts that boosted cash in the Treasury’s account at the central bank to nearly $1 trillion. The Treasury General Account, or TGA, operates like the government’s checking account at the Fed. When Treasury increases its cash balance, it drains reserves from the system, and vice versa. As a result, outstanding bank reserve balances dropped by $466 billion in the week ended April 20, the largest weekly decline on record, Fed data show.