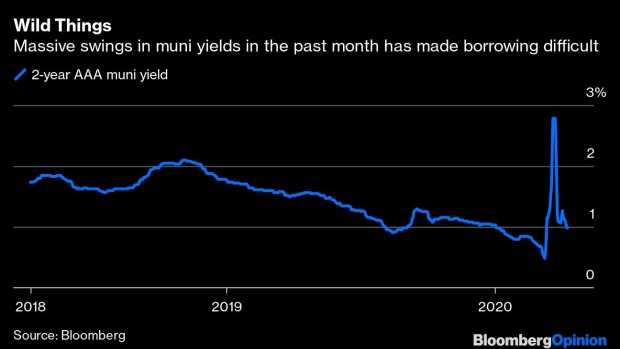 (Bloomberg Opinion) -- The Federal Reserve is not leaving any corner of the U.S. bond market behind in this crisis.

There’s no other way to interpret the central bank’s sweeping measures announced Thursday, which together provide as much as $2.3 trillion in loans to support the economy. It will wade into the $3.9 trillion U.S. municipal-bond market to an unprecedented degree, can now purchase “fallen angel” bonds from companies that have recently lost their investment-grade ratings, and has expanded its Term Asset-Backed Securities Loan Facility to include top-rated commercial mortgage-backed securities and collateralized loan obligations.

This is new and close to what I’ve argued for over the past year. The Fed’s facility will buy muni debt directly from issuers that’s sold for cash-flow purposes and matures no later than 24 months from the date of issuance. I had figured that for simplicity the central bank would make this available only to states, but the Fed decided that in addition to states and Washington, D.C., it would also buy notes from cities with more than 1 million residents and counties with more than 2 million.

The Treasury Department is making an initial $35 billion equity investment, and the vehicle can snap up as much as $500 billion of eligible debt.

At first glance, this looks well done. The parameters are probably enough that it won’t break the muni market, while it should force down short-term borrowing costs and allow states and large localities to raise a lot of cash in a hurry. That’s what’s needed as much as anything during the coronavirus pandemic.

The central bank split the difference. It changed the parameters of both of its corporate credit facilities to include fallen angels that were investment grade just a few weeks ago but lost those ratings because of the intentional economic shutdown. The specific wording is this: “Issuers that were rated at least BBB-/Baa3 as of March 22, 2020, but are subsequently downgraded, must be rated at least BB-/Ba3 at the time the Facility makes a purchase.”

That’s a potential boon to the likes of Ford Motor Co., which became the largest fallen angel on March 25 after both Moody’s Investors Service and S&P Global ratings dropped its $35.8 billion of debt into speculative grade. Overall, the yield difference between double-B and triple-B rated debt has ballooned to 290 basis points from as little as 38 basis points in December.

That spread will likely tighten if high-yield investors need not fret about downgrades causing a supply glut. Indeed, the largest exchange-traded fund tracking the high-yield market surged by the most since January 2009 on Thursday. It didn't hurt that the Fed also said it might buy a small amount of ETFs “whose primary investment objective is exposure to U.S. high-yield corporate bonds.”

The two facilities combined could reach up to $750 billion in size — a huge bite out of the corporate-bond market.

The Fed’s TALF has even more rigid parameters than the muni and corporate facilities. The most notable carve-out in Thursday’s announcement appears to be for commercial mortgage-backed securities.

All the eligible securities for this vehicle must be rated triple-A and have been issued on or after March 23, with the one exception of CMBS. Rather, the Fed can buy only legacy CMBS issued before that date that are tied to real property in the U.S. or its territories. CMBS investors and even a group of bipartisan lawmakers have been pounding the table for inclusion in TALF after the commercial real-estate market was inundated with margin calls and forced selling late last month.

All this, of course, is in addition to the Fed’s relentless purchases of U.S. Treasuries and agency mortgage-backed securities. BlackRock Inc. said on Wednesday that the central bank’s balance sheet would most likely grow to more than $10 trillion in the coming year from $4.2 trillion at the start of 2020 and would potentially exceed 50% of nominal U.S. gross domestic product.

“Our emergency measures are reserved for truly rare circumstances such as those we face today,” Fed Chair Jerome Powell said in a webcast Thursday. “When the economy is well on its way back to recovery, and private markets and institutions are once again able to perform their vital functions of channeling credit and supporting economic growth, we will put these emergency tools away.”

Calling the Fed’s actions “throwing the kitchen sink” at the bond markets seems like a huge understatement. It’s extending its reach into everything, which is probably fine for now. The tricky part will be knowing when and how to let go.