It's all about the Fed: Will markets be disappointed?

Financial markets have gotten used to the Federal Reserve adjusting its benchmark interest rate in small increments. They might want to be ready for a change.

While no move is expected as officials gather this week, economists and investors generally agree the Fed is going to cut rates this year. The last two times the Fed began an easing cycle, in 2001 and 2007, it opted for a half-percent move over a quarter point adjustment.

If and when the Federal Open Market Committee decides to ease again this year, its members will seriously contemplate doing the same. 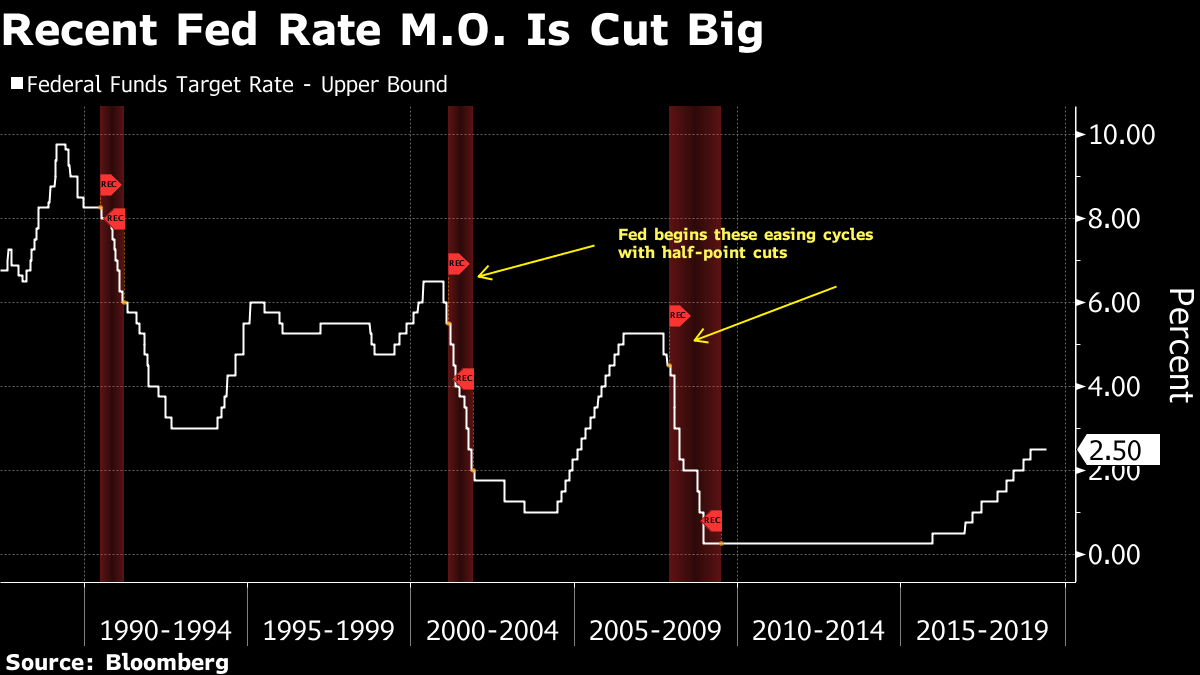 Here are the arguments for and against:

“The FOMC is actually eager to deliver an easing surprise, and in fact at times judge the success of their easing actions precisely by the market impact that only comes from a surprise,” he said.

For: Ahead of the Curve

In their own review of the 25-versus-50 debate, economists at Morgan Stanley pointed out that if the Fed is trying to address looming economic risks, “it makes sense to get ahead of the curve to bolster confidence and leave markets more settled.”

Failing to do so can leave the Fed needing to act again soon and make officials appear too timid, they added in the May note.

For: Gone Too Far

Former Fed Chairman Alan Greenspan frequently argued that the last move in a series of hikes or cuts was often viewed in hindsight as unnecessary.

“Therefore, when we move in a different direction for the first time, it’s probably wise to remember that the existing level of rates embodies one more move than we needed to do,” he told colleagues on a Jan. 3, 2001 telephone conference call when the Fed delivered a surprise inter-meeting 50-basis-point cut.

Though far from certain, that may end up being true for the Fed’s December rate hike. The move, when paired with a signal of more increases to come, spooked investors who had begun to worry about slowing global growth.

For: Close to Zero

The target range for the federal funds rate currently stands at 2.25% to 2.5%, which means the Fed many not have enough ammunition to fight a full-blown recession. That makes it more important for the Fed to be aggressive when it cuts, getting the most impact out of every step downward.

“Hitting the zero-lower bound is a problem, so you don’t want to hold your fire” in the face of deteriorating economic conditions, said Scott Brown, chief economist at Raymond James Financial Inc. “That means you need to go sooner than you would otherwise, and larger.”

With inflation running persistently below the Fed’s 2% target, and inflation expectations falling, that means the potential negative consequences of cutting too much are meaningfully reduced. The Fed is less likely to unleash unwanted higher inflation with aggressive cuts.

Those who argue against a big cut note that a swift move down carries real risks. Most importantly, it could mistakenly convey a sense of panic.

In the face of a 50 basis-point cut many investors will inevitably ask, “What does the Fed know that we don’t know?” said Raymond James’ Brown.

The most tangible risk would be the threat of feeding incipient financial market bubbles. Rates have been easy for more than a decade, spurring repeated worries about asset valuations. Corporations are widely viewed as over-leveraged, especially among companies rated below or just above investment grade.

If the Fed aggressively eases borrowing costs, that will only add to the piles of debt the Fed already worries will amplify the next recession.