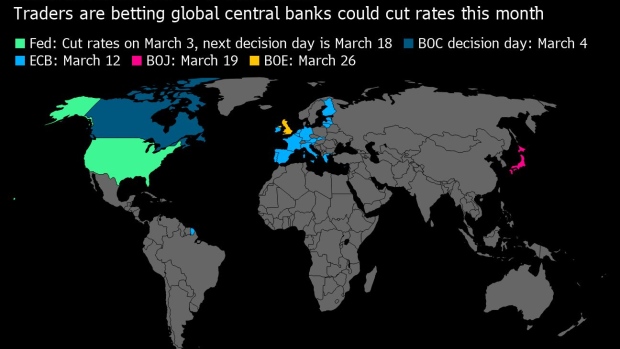 The Federal Reserve’s decision to slash U.S. interest rates to contain the economic damage from the coronavirus leaves policy makers in Europe and Japan under more pressure from investors to follow suit even though they have less scope to do so.

The emergency cut, delivered shortly after Group of Seven finance chiefs jointly vowed to take action where appropriate, was cheered by markets -- albeit briefly. It was, however, met with silence by the central bank’s peers elsewhere.

In some cases, that likely reflects how years of radical stimulus have left monetary authorities with little room to do more. Before its reduction, the Fed’s target rate was around a full percentage point higher than the Bank of England’s benchmark. The European Central Bank and Bank of Japan already have rates below zero.

But they may not hold out too much longer, especially if the Fed’s move fuels a rally in their currencies against the dollar. Investors expect rate cuts by the Bank of Canada on Wednesday, and the BOE and ECB this month. Australia and Malaysia lowered borrowing costs even before the Fed on Tuesday.

“By moving ahead decisively the U.S. central bank will put intense pressure on others to follow,” said Krishna Guha, vice chairman at Evercore ISI in Washington and a former Fed official.

The ECB’s deposit rate is already at a record-low minus 0.5%, and policy makers including President Christine Lagarde have expressed concerns over side effects such as squeezed bank profitability and rising home prices. Money markets are pricing only a 10 basis point reduction by next week’s policy meeting, and another 10 basis points later in the year.

Policy makers have signaled they may lean on targeted measures such as more long-term bank loans instead of a rate cut, helping to direct credit to companies blighted by the fallout from the virus.

The euro jumped against the dollar after the Fed’s move, and if that gain persists, it’s unwelcome news for a bloc that relies heavily on exports. While the ECB doesn’t target the exchange rate, it has periodically inserted language into its policy statement warning that volatility is a source of uncertainty that requires monitoring.

“Some euro appreciation may be a small price to pay if the bank is hoping for a free ride on the Fed’s easing efforts,” said Valentin Marinov, head of G-10 currencies research at Credit Agricole SA. “The euro is cheap and the ECB is aware of that.”

The BOE’s interest rate currently stands at 0.75%, and officials say this can be cut to close to zero if needed. While policy makers have ruled out taking rates negative, they reiterated Tuesday they have the equivalent of about 250 basis points of policy space left if other measures are included.

Governor Mark Carney, who leaves the BOE this month, said on Tuesday that “there’ll be some differences in the exact form and timing” of global measures, but they will be “both powerful and timely.”

In January, he said the BOE has sufficient headroom to “at least double” its August 2016 package of 60 billion pounds ($77 billion) of asset purchases, which would deliver the equivalent of around a 100 basis-point rate cut. The use of forward guidance, or explaining how the bank might respond to economic changes, also “adds to this armory,” he said.

Andrew Bailey, who takes the helm on March 16, may give more insight when he appears before lawmakers on Wednesday.

The BOJ is limited in scope given its main rate is already minus 0.10% and it too has witnessed the side effects of negative rates.Unlike the Fed, it noticeably refrained at hinting at additional stimulus in recent days despite speculation Japan’s economy is again in recession. Instead, it emphasized measures aimed at ensuring market stability such as buying exchange traded funds and using special bond operations.

The BOJ could officially raise its target for ETF purchases to show it’s stepping up action, or say it’ll buy at a faster pace during the virus outbreak without changing the target. On a smaller scale, it could craft a lending program for companies hurt by the virus.

If the economic risk lingers, the BOJ could strengthen its messaging to show an even greater bias to easing, perhaps referring to risks from the virus in its wording.

Ultimately, if its peers cut rates and the yen strengthens or the economy buckles, it may have to join in. There is precedent for not doing so though, given it didn’t participate in the coordinated rate cut during the 2008 global financial crisis.

--With assistance from Simon Kennedy, Paul Jackson and Carolynn Look.

To contact the editors responsible for this story: Paul Gordon at pgordon6@bloomberg.net, Alaa Shahine