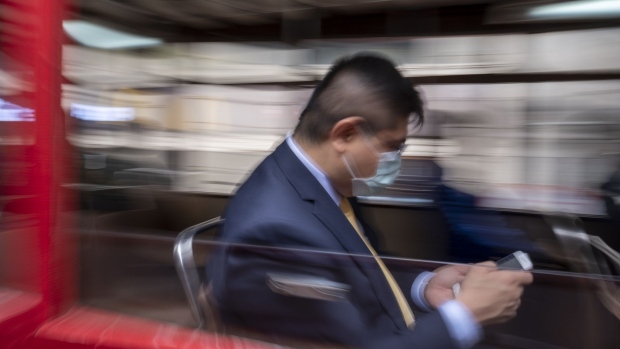 A passenger wearing a protective mask rides a tram in Hong Kong, China, on Wednesday, Feb. 12, 2020. Hong Kong's exchange faces a challenging year as the spreading coronavirus chokes off deals, adding more urgency to its efforts to convince Beijing to further open its markets and cement the bourse's role as a gateway to China's corporate giants. Photographer: Justin Chin/Bloomberg , Bloomberg

(Bloomberg) -- Federal Reserve Bank of Cleveland President Loretta Mester said the impact of the coronavirus and the risk it poses to the global economy haven’t changed her forecast for continued growth of about 2% in the U.S. this year.

“Right now I’m thinking about that as a risk,” Mester said Friday in an interview with Michael McKee on Bloomberg Television, referring to the virus that has killed more than 1,300 people, mostly in China.

“There could be spillover to the U.S. economy” in the first quarter, she said. “But in general I’m seeing that as a risk to my forecast. I haven’t marked down my forecast because of it.”

Fed Chairman Jerome Powell told lawmakers on Tuesday the Fed is closely monitoring the situation. But officials so far have not given any indication they believe the outbreak and its impact on global commerce will force them to lower interest rates again after cutting three times in 2019.

To contact the editors responsible for this story: Margaret Collins at mcollins45@bloomberg.net, Alister Bull