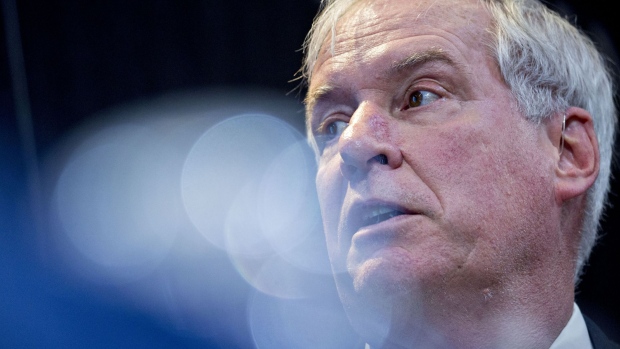 Federal Reserve Bank of Boston President Eric Rosengren said he foresees participation in the long-awaited Main Street Lending Program to “build substantially over time,” especially if the U.S. experiences a resurgence of the coronavirus this fall.

“I expect over the course of this next week we’ll see more and more pickup,” Rosengren said Friday in an interview with Bloomberg News. “I anticipate plenty of borrowers and plenty of banks participating in the program as it continues to roll out.”

He said more than 200 financial institutions of various size from across the country had begun registering to participate, and that interest from businesses was “tremendous.”

The program, an emergency credit facility created by the central bank and administered by the Boston Fed, aims to provide loans to small and mid-size businesses and was opened for lender-registration Monday after lengthy delays. The Fed received thousands of comment letters in response to the initial announcement of the program, and some critics argue the terms and complexity of the program may still not be favorable to borrowers or lenders.

The program purchases a 95 per cent stake in loans made by banks of US$250,000 to US$300 million to companies damaged by coronavirus-related shutdowns. The Fed is also considering expanding it to include non-profits.

The program is capped at US$600 billion, but Rosengren said it’s not possible to predict the ultimate take-up from the program, as that may depend on the course of the pandemic.

“It actually has the potential to be a significant help to a lot of borrowers, both businesses and non-profit borrowers, particularly if the fall ends up being more troublesome than we’re hoping,” he said.

Rosengren said he’s spoken with many medical and disease experts in Boston who have counseled him to expect either a series of second waves for the coronavirus this fall in different parts of the U.S. or one second wave.

“Either of those outcomes means the fall will not be as robust as many people are hoping,” he said, referring to the economy.

In a speech earlier Friday, the Boston Fed chief said more fiscal and monetary policy response will probably be needed to support the economy through the downturn that has resulted. He sees unemployment remaining above 10% through the end of this year, with inflation persisting “well below” the Fed’s two per cent target.

“Unemployment remains very high, and because of the continued community spread of the disease and the acceleration of new cases in many states, I expect the economic rebound in the second half of the year to be less than was hoped for at the outset of the pandemic,” he said.

Rosengren’s outlook put him on the pessimistic side of projections released June 10 by the Federal Open Market Committee. The median forecast for unemployment at the end of 2020 among the 17 policy makers was 9.3 per cent.

But Rosengren is not alone in warning that recent strong economic indicators -- like the May jobs report and retail sales data -- may be misleading. Fed Chair Jerome Powell, appearing before lawmakers this week, said he expects a significant bounceback in the labor market in the near term, but one that leaves the U.S. far short of employment levels seen before the pandemic.

Rosengren focused some of his remarks on re-opening efforts in some states, like South Carolina and Florida, where there is evidence that new cases are rising.

“Given the death toll of the virus even with the economic lockdown, I see a substantial risk in reopening too fast and relaxing social distancing too much,” he said.

He also made clear the threat is not just to public health, but also to the economy.

“Even if you didn’t care about hospitalizations and deaths, which I do, if you care about the economy you want to re-open safely and not unsafely,” he said in the interview.