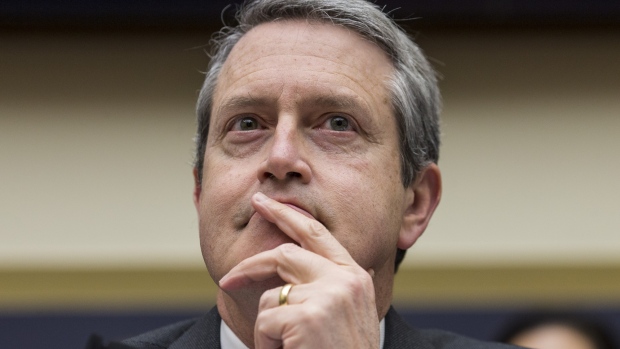 Onlookers watch the evening sun set on the horizon beyond skyscrapers including the Leadenhall building, also known as the 'Cheesegrater,' Tower 42, 30 St Mary Axe also known as 'the Gherkin,' and the Heron Tower, in the City of London, U.K. Photographer: Simon Dawson , Bloomberg

(Bloomberg) -- The Federal Reserve says the London interbank offered rate is going to come to an end and markets need to take warnings about that “seriously.”

That’s the message from Randal Quarles, the central bank’s vice chairman for banking supervision, speaking Monday via pre-recorded video to a roundtable of the Alternative Reference Rates Committee.

“Clarity on the exact timing and nature of the Libor stop is still to come, but the regulator of Libor has said that it is a matter of how Libor will end rather than if it will end, and it is hard to see how one could be clearer than that,” he said.

Officials around the world have been working to develop alternatives to the beleaguered reference lending rate, which is due to be phased out by the end of 2021. In the U.S., the effort has been spearheaded by the ARRC, a group of private-market participants convened by the Fed. The alternative favored by U.S. regulators that has been developed for the dollar market is the Secured Overnight Financing Rate, although there remain some question marks over its adoption.

“I believe that the ARRC has chosen the most viable path forward and that most will benefit from following it, but regardless of how you choose to transition, beginning that transition now would be consistent with prudent risk management and the duty that you owe to your shareholders and clients,” Quarles said. “With only two and a half years of further guaranteed stability for Libor, the transition should begin happening in earnest.”

Recommended fallback language for products linked to Libor is also being developed, but simply relying upon this to transition does bring operational and economic risks, according to Quarles.

“Many seem to take comfort in continuing to use Libor -- it is familiar, and it remains liquid. But history may not view that decision kindly,” Quarles said. “After Libor stops, it may be fairly difficult to explain to those who may ask exactly why it made sense to continue using a rate that you had been clearly informed had such significant risks attached to it.”

To contact the reporters on this story: Alexandra Harris in New York at aharris48@bloomberg.net;Christopher Condon in Washington at ccondon4@bloomberg.net

To contact the editors responsible for this story: Benjamin Purvis at bpurvis@bloomberg.net, Alister Bull