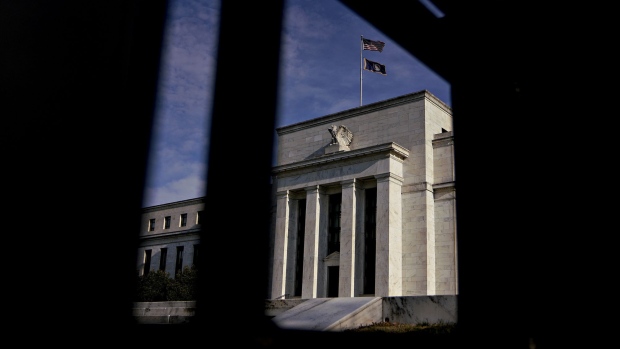 U.S. central bankers saw the coronavirus pandemic posing a severe threat to the economy when they met last month and were also concerned by the risks to financial stability.

Officials agreed the “economic effects of the pandemic created an extraordinary amount of uncertainty and considerable risks to economic activity in the medium term,” minutes published Wednesday of the April 28-29 Federal Open Market Committee meeting showed. “A number of participants commented on potential risks to financial stability. Participants were concerned that banks could come under greater stress.”

Fed officials left interest rates near zero when they gathered in late April. In their post-meeting statement, they said the ongoing public health crisis posed “considerable risks to the economic outlook over the medium term,” playing down the notion the U.S. could expect a rapid recovery.

Fed Chairman Jerome Powell also followed the meeting with a somber press conference. He warned the coronavirus pandemic could leave permanent scars on the U.S. economy unless policy makers of all stripes did more to limit the damage.

The minutes reinforced that gloomy assessment. The committee listened to a staff presentation that projected, at best, a weak recovery beginning in the second half of this year, while acknowledging the risk of a more disappointing result.

Policy makers then spent considerable time discussing multiple scenarios. As a base case, they acknowledged that consumer spending in the hardest hit sectors of the economy would “likely not return quickly to more normal levels.” They also expressed concern that a large number of small businesses may fail, or may not be able to adapt successfully to new business models even if they survive the enforced shutdowns.

From there the discussion of potential scenarios grew darker.

“A number of participants judged that there was a substantial likelihood of additional waves of outbreak in the near or medium term,” the minutes said. “In such scenarios, it was believed likely that there would be further economic disruptions.”

A number of participants also warned of the possibility of business and household insolvencies mounting to the point of threatening financial stability. While the Fed’s regulatory powers lie with the Board of Governors, a number of FOMC participants weren’t shy about recommending action.

“The upcoming financial stress tests for banks were seen as important for measuring the ability of large banks to withstand future downside scenarios,” the record of the meeting stated. “A number of participants emphasized that regulators should encourage banks to prepare for possible downside scenarios by further limiting payouts to shareholders, thereby preserving loss-absorbing capital.”

The committee agreed the Fed should continue its purchases of Treasuries and mortgage-backed securities, as well as large-scale overnight and term repo operations, to support smooth market functioning.

There was also a debate about clarifying Fed monetary policy intentions “at upcoming meetings,” including some limited discussion of targeting yields for some Treasury maturities, a policy known as yield-curve control.

“A few participants also noted that the balance sheet could be used to reinforce the committee’s forward guidance regarding the path of the federal funds rate through Federal Reserve purchases of Treasury securities on a scale necessary to keep Treasury yields at short- to medium-term maturities capped at specified levels for a period of time,” the minutes said.

Some officials also talked about making Fed forward guidance more explicit by spelling out certain economic outcomes “such as a certain level of the unemployment rate or of the inflation rate—that must be achieved before the committee would consider” raising rates.

Such a move would recall the guidance used by the Fed in 2012 when it said it would hold rates low until inflation rose and unemployment fell, dubbed the “Evans Rule” after Chicago Fed President Charles Evans who had argued for the strategy.

The minutes provided no mention of policy makers discussing the option of negative interest rates.

More than 36 million Americans have lost their jobs as the contagion forced thousands of businesses to close their doors across the country. Economic activity plunged by 4.8 per cent on an annualized basis in the first quarter. Economists have estimated it will collapse by a staggering 34 per cent in the second quarter.

The Fed has scrambled to prepare a host of emergency lending programs since mid-March, first to smother a selling panic that gripped short-term money markets, then to mobilize credit for distressed U.S. households and businesses -- as well as state and local governments. It’s launched five programs so far. Four more, including a US$600 billion Main Street Lending Program, are expected to begin operating later this month.

The April 28-29 FOMC meeting was held via video conference. It was the first regularly scheduled session for the panel since January. The meeting planned for March 17-18 was canceled after the committee held two emergency sessions on March 3 and 15 at which the FOMC lowered the target range for the Fed’s benchmark interest rate by a total of 1.5 percentage points. The range remains at zero to 0.25 per cent.