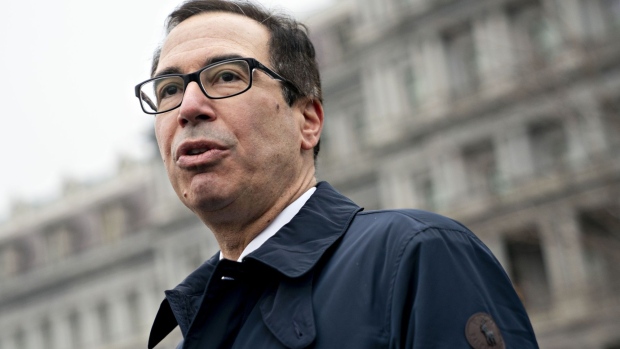 Treasury Secretary Steven Mnuchin said he plans to use all of the US$500 billion that Congress provided to help the economy through direct lending from his agency and by backstopping Federal Reserve lending programs.

Mnuchin said he has pledged to use US$195 billion of those funds so far, and will use the rest after determining how best to deploy the money to help losses associated with the coronavirus pandemic.

“I expect to allocate all the capital as needed as was given to us,” Mnuchin said Tuesday during a Senate Banking Committee hearing held online. “We are fully prepared to take losses in certain scenarios on that capital.”

Mnuchin’s plans to exhaust the funds underscore the depth of the crisis faced by the U.S. after the coronavirus outbreak prompted social distancing policies and stay-at-home orders that shut down much of the economy.

Unemployment has soared to levels not seen since the 1930s Great Depression. In the first two months of the pandemic-induced economic shutdown, more than 35 million people lost jobs. Almost 40 per cent of Americans in households making less than US$40,000 a year lost a job in March, according to the Federal Reserve.

Of the loan fund, $454 billion is to backstop the Fed’s emergency lending facilities, while the rest is for direct lending to companies from the Treasury Department.

“The only reason I have not allocated it yet fully is we are just starting to get these facilities up and running,” Mnuchin said. “We want to have better idea as to which one of the facilities need more capital, as well as the potential for adding additional facilities.”

Mnuchin called for easing social distancing guidelines as soon as possible to restart the economy, echoing comments from President Donald Trump. To underscore the point, the Treasury chief told the senators he’s willing to go to the Capitol to answer questions in person, saying it’s safe enough to do so.

“There is the risk of permanent damage” to the economy if it remains closed, he said.

Mnuchin said he expects an economic rebound to begin in the second half of this year. Fed Chairman Jerome Powell, who testified at the same hearing, sees a longer road to recovery.

Powell said the scope and speed of the downturn “are without modern precedent and are significantly worse than any recession since World War II” and reiterated that a full recovery may take until the end of 2021.