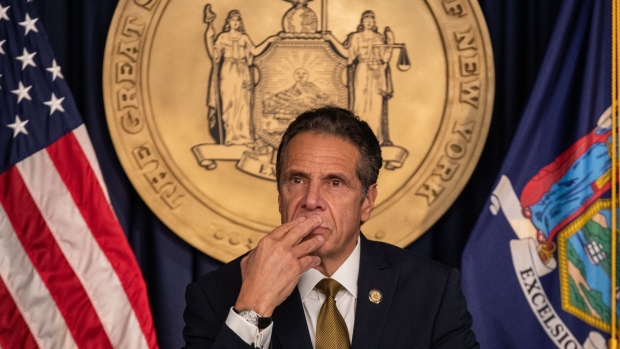 (Bloomberg) -- The U.S.  Justice Department is looking into sexual harassment claims against former New York Governor Andrew Cuomo, according to a disclosure in a contract filed with the New York state comptroller’s office.

Cuomo resigned in August after state Attorney General Letitia James released a report detailing a pattern of alleged sexual assault and harassment claims against state employees and other women. In connection with the investigation, Cuomo and the Executive Chamber retained legal counsel and had to disclose contracts for the services to the state Comptroller.

In a contract with Willkie Farr & Gallagher, the law firm said it was retained as outside counsel from Sept. 10, 2021 through Sept. 9, 2022 due to “inquiries and requests for information” related to multiple inquiries from the Department of Justice and other law enforcement agencies, according to the contract obtained by Bloomberg News. An inquiry stops short of a formal probe, indicating preliminary work to determine if a formal investigation can and should be opened.

Cuomo has denied all allegations. “Our understanding is that the Civil Division opened an inquiry in August based upon the AG’s politically motivated sham report and we have heard nothing since,” Rich Azzopardi, a spokesman for Cuomo said in an email Thursday.