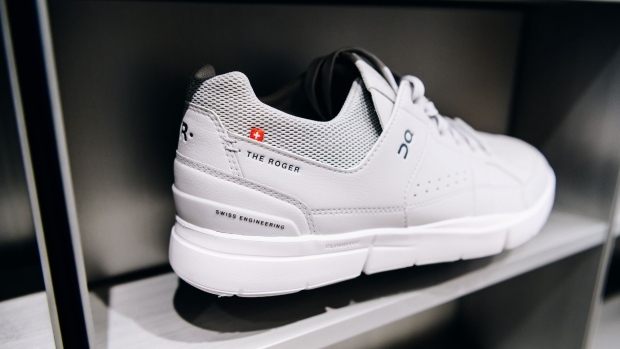 The "Roger" sneakers, named after Roger Federer, at the On flagship store in New York. , Bloomberg

Swiss running shoemaker On Holding AG, whose proprietary cushioning technology has attracted tennis legend Roger Federer as an investor, climbed 46 per cent on its first day of trading in New York.

The shares closed at US$35.00 on Wednesday, after being sold for US$24 apiece in the initial public offering. The Zurich-based company raised US$746 million after marketing the stocks for US$20 to US$22.

On has become one of the world’s fastest-growing running-shoe brands since it was founded a decade ago. The marque got a boost from the pandemic thanks to a lockdown-inspired boom in running, outdoor and casual clothing. The shoes, known for their distinctive tubular cushions on the sole, have garnered somewhat of a cult following. Federer became a shareholder in 2019, and the company has unveiled a shoe he helped design which sells for about US$200.

“The IPO gives us another starting line, the opportunity to further grow around the world,” co-founder David Allemann said in an interview. On plans to open its next store in Tokyo in 2022 and is eyeing additional shops in the U.S. and China.

Allemann was joined by some 100 runners in jogging along the Hudson River to the New York Stock Exchange ahead of the opening bell.

“The brand’s home is Switzerland, but as a global brand we wanted it to be part of the most global stock market and address a global investor community,” Chief Financial Officer Martin Hoffmann said.