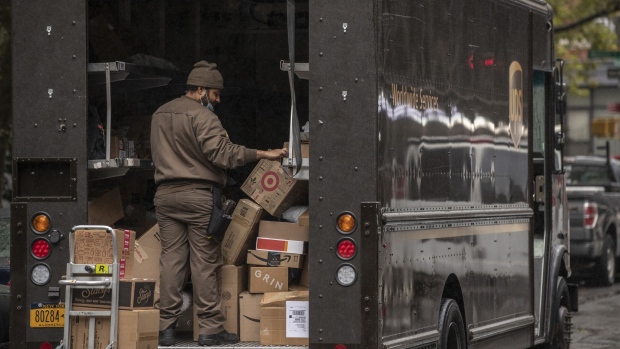 FedEx Corp. and United Parcel Service Inc. are running into a shortage of delivery vans during a record surge in package volumes.

Urged by the couriers to purchase any vans they can scrounge up, leasing companies are dipping into the used market. Added demand “is creating shortages” in the rental market, UPS in an email while emphasizing that the company’s own operations haven’t been hurt. FedEx is paying a stipend to its contractors to offset the extra cost of renting.

“If there’s a cargo van out there, we’re trying to buy it,” said Brendan Keegan, chief executive officer of Merchants Fleet, which provides vehicles to package delivery companies. It expects to have 15,000 vans out for lease at year-end, up from 6,000 a year earlier.

The van drought sprang from pandemic-induced shutdowns at factories that build the high-ceiling and box-like vehicles -- just as soaring e-commerce ratcheted up demand for home deliveries. FedEx and UPS don’t expect the scarcity will hobble delivery capacity. But it adds to the rising costs of doing business as COVID-19 rages on, which have prompted couriers to add surcharges for the holiday season.

“UPS and others have implemented peak surcharges to help offset the added expense during peak,” the Atlanta-based company said in an email. “Rental vehicles are included within those expenses.”

Rising costs from efforts to speed deliveries have been a source of concern for Wall Street analysts, even as investors have rushed to buy shares in both couriers amid the virus-fueled delivery boom. UPS has jumped 48 per cent this year through Tuesday while FedEx has surged 93 per cent.

Total vehicle output is nearing pre-pandemic levels, yet inventories are still thin. The number of all new vehicles available in the U.S. was almost one million units lower in October than a year earlier, according to researcher LMC Automotive.

FedEx is offering to compensate some of its independent delivery contractors for the costs of having to rent more vehicles this year than is typical during the holidays, said Steve Myers, senior vice president of operations for the company’s Ground unit.

“Many of our service providers, especially for the peak season, have pivoted more to the rental market,” he said. “So, we work with them on that.” Myers declined to estimate the added costs or effect on profit margins, as did UPS.

Amazon.com Inc. said it hasn’t seen signs of a shortage. And leasing companies face the risk that demand could be short-lived for vehicles that would stay in their fleets for years, said Joel Eigege, vice president of rental products for Ryder System Inc. But there’s no doubt that there’s plenty of appetite for vehicles now, he said.

“There is definitely a shortage of units in the market, specifically raised roof cargo vans for delivery,” Eigege said.

Some of the bottleneck lies with manufacturers of custom truck bodies for step vans, which were affected by the auto plant closures.

Shyft Group Inc.’s backlog for its customized vehicles quintupled to US$282 million in October from a year earlier, CEO Daryl Adams said this month on an earnings conference call.

Orders from parcel delivery companies are rising sharply, “and customers have been asking us to fill them with urgency,” he said.

Keegan, of leasing company Merchants, typically buys vans directly from the automakers but has had to call dealers around the country and turned to purchasing used vehicles. While he expects that production will catch up, growth will remain robust.

“Cargo vans will continue to be our fastest growing asset class,” he said.