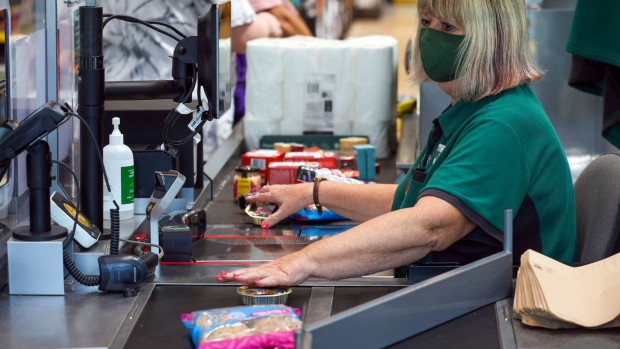 An employee passes goods along a conveyor belt at a checkout in a Morrisons supermarket, operated by Wm Morrison Supermarkets Plc, in Saint Ives, U.K., on Monday, July 5, 2021. Apollo Global Management Inc. said Monday it's considering an offer for Morrison, heating up a takeover battle for the U.K. grocer. Photographer: Chris Ratcliffe/Bloomberg , Bloomberg

(Bloomberg) -- Shop floor workers at Wm Morrison Supermarkets Plc won a ruling in a U.K. employment tribunal in their fight for equal pay.

The roles of mostly female workers in stores can be directly compared to male-dominated positions in distribution centers, according to the decision published Tuesday. The ruling advances the prospects for thousands of women in the U.K. grocery and retail sectors to be awarded equal pay.

The U.K. Supreme Court ruled earlier this year that the salaries earned by women who work in Asda’s grocery stores could be compared to men who predominantly work in warehouses. The U.K.’s biggest retailers, including Asda, J Sainsbury Plc and Tesco Plc, are all facing lawsuits on equal pay and could ultimately face a collective 8 billion pounds ($11 billion) in payments to employees.

“We hope that this will help Morrisons to recognize the hard work their shop floor staff do and finally pay their staff what they are worth,” Emma Satyamurti, a lawyer at Leigh Day representing the workers, said in a statement.

Morrison and the other major grocers have argued that store worker jobs should be distinct to roles in warehouses.

“The decision does not decide if retail and logistics roles are of equal value. Morrisons pays a fair day’s wage for a fair day’s work and will continue to fully defend these proceedings,” a Morrison spokeswoman said.

The decision only relates to how workers can be compared and made no comment on whether the equal pay claims will succeed.