Loonie dropping back to record low not that extreme of an idea: Fidelity's David Wolf

The Canadian dollar may sink back to its record low of 62 U.S. cents ($1.61) as the country retrenches from a consumer-spending boom into the face of a slowing global economy, said David Wolf at Fidelity Investments.

A 17 per cent drop from current levels of around 75 U.S. cents may sound like a lot but the currency has already fallen about 30 per cent from above par in 2011 when Canada’s economic stars were aligned, said the Toronto-based portfolio manager. Back then, the country was revving up from the financial crisis and oil was over US$100 a barrel.

Now, the nation may already be in recession after growing at an annualized pace of just 0.4 per cent in the fourth quarter and a pretty “soggy” start to the year, said Wolf, part of the asset allocation team at Fidelity Investments Canada, which manages about $136 billion. He stressed his views were his own, not the firm’s.

“There’s a good chance that those stars are going to be misaligned,” Wolf said in an interview at Bloomberg’s Toronto office. 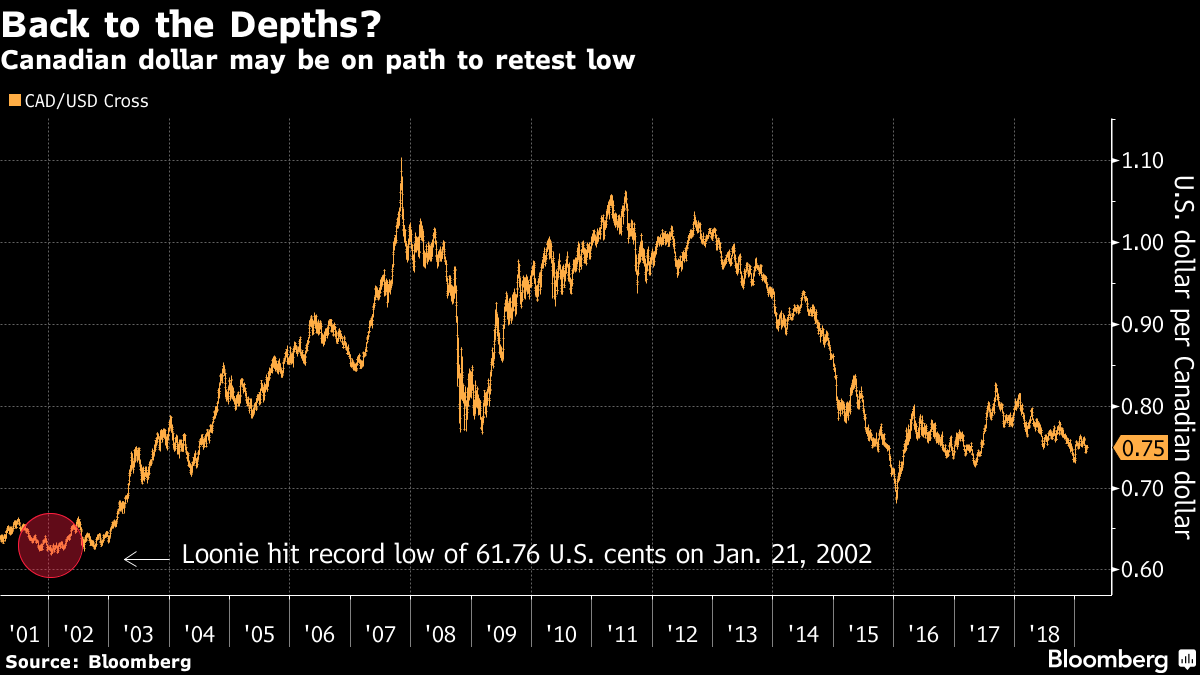 The big problem for Canada is that a household deleveraging appears to be starting just as the global economy is slowing, said Wolf, who was was an adviser at the Bank of Canada before joining Fidelity in 2014. Home values fell nationwide last year for the first time since at least 1990, while household debt burdens touched a record high. Meanwhile, Canada’s competitiveness problems remain, he said.

“It may not meet that technical definition, but it could very well feel like a recession for a big part of the economy,” said David Tulk, an institutional portfolio manager who works with Wolf. History has shown that it takes a “long, long” time to restore household balance sheets, a situation that will be all that more difficult with trade and business spending hampered, he said.

Wolf and Tulk said it’s hard to say how long or deep Canada’s slowdown will be.

“You’ve never had debt levels as high, relative to incomes in Canada,” said Tulk. Even if the Bank of Canada has stopped raising rates, “there’s still kind of a big bulge in the python, so to speak, in terms of prior increases in interest rates and prior actions.”

While Canada’s job market has been on fire, posting its best start to the year since 1981, Tulk points out said the gauge is a lagging indicator; hours worked have receded. Business investment in the final three months of 2018 meanwhile, fell 5.9 per cent from the first quarter of last year, and 22 per cent below record high levels in 2014.

Wolf has been bearish on the loonie in the past. Lately, he’s getting some company. Toronto-Dominion Bank downgraded its forecast on Friday, seeing at within a range of $1.35 to $1.40 per dollar (74 U.S. cents to 71 U.S. cents) for much of this year. Citigroup technical strategists are targeting $1.36 to $1.37.

The median of analyst forecasts’ compiled by Bloomberg puts the loonie at 77.52 U.S. cents in the fourth quarter of the year.

One option to shield investors from potential shakeout of Canadian assets is to replace some of them with emerging markets, which are cheaper and have better long term growth prospects, said Wolf.

--With assistance from Theophilos Argitis