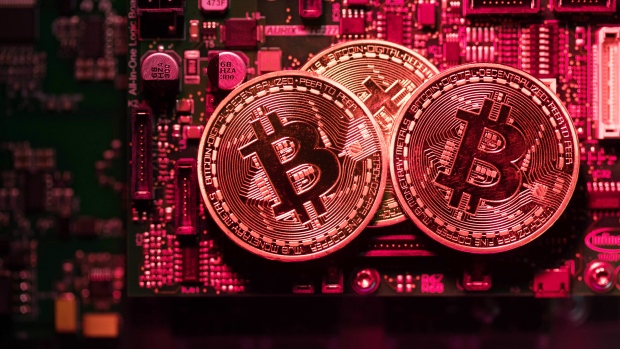 A pile of coins representing Bitcoin cryptocurrency sit grouped together in the U.K. , Chris Ratcliffe/Bloomberg

Fidelity Investments is jumping into the emerging cryptocurrency arena with a new business to manage digital assets for hedge funds, family offices and trading firms.

The mutual fund giant will offer security and storage services, trade execution and customer service for digital assets, Fidelity said Monday in a statement. The firm is participating today in the Bloomberg Institutional Crypto conference in New York.

“Our goal is to make digitally native assets, such as Bitcoin, more accessible to investors,” Fidelity Chief Executive Officer Abigail Johnson said in the statement.

The business, dubbed Fidelity Digital Assets, is a bet to capitalize on Wall Street’s nascent appetite for trading and safeguarding digital currencies. It also puts the Boston-based firm a step ahead of top Wall Street players that have mostly stayed on the sidelines so far.

Fidelity Digital Assets initially will roll out support for Bitcoin and Ether starting early next year. It will also offer over-the-counter trade execution and order routing.

Top executives at Fidelity, a 72-year-old firm that’s among the largest providers of retirement savings and mutual fund products, are hoping they can build on the company’s well known brand name and win over institutional customers keen on digital currency trading. The company already works with more than 13,000 financial institutions.

“Most institutions want to deal with another institution,” Tom Jessop, who is heading the unit, said a telephone interview. “We understand institutional finance.”

The firm has a “robust pipeline of customers,” said Jessop, who was previously president of Chain Inc., which offers blockchain technology to financial companies. There are more than 370 crypto funds managing as much as US$10 billion in assets, according to Autonomous Research -- still just a drop in the bucket in the investment universe.

Crypto custody services are currently offered by startups like Coinbase Inc. Goldman Sachs Group Inc. has been considering a plan to offer custody for crypto funds, Bloomberg reported in August. Northern Trust Corp. has examined the potential for custody services.

For Johnson, who took over as CEO in 2014, the digital assets company is a dramatic step. While many other large fund companies have recoiled from crypto on the grounds that it’s too legally murky, Fidelity has embraced the evolving realm relatively early. That’s in part because Johnson has advocated for broader adoption of blockchain technology, which is a decentralized ledger underpinning cryptocurrencies like Bitcoin.

The price of Bitcoin has fallen 67 per cent from its high in December 2017, and was trading at about US$6,399 at 12:13 p.m., according to a composite of prices compiled by Bloomberg.