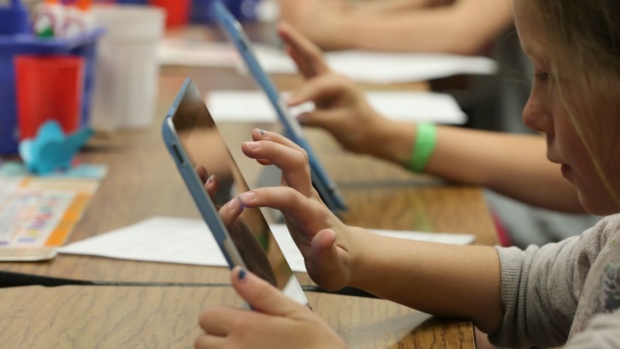 Second graders work on Apple Inc. iPads as part of their classroom work at Park Lane Elementary school, in the Canyons School District, in Sandy, Utah, U.S. on Monday, May 20, 2013. , George Frey/BLOOMBERG NEWS

A decades-long push to teach children the basics of money is finally coming to Ontario elementary schools in the fall.

All provinces have some sort of financial literacy initiative. They vary from province to province but all have been criticized for not properly preparing kids for the real world.

Under the new Ontario curriculum, students will learn how to code, add fractions, and plan their finances starting in the first grade. By the sixth grade they will have been taught various payment methods, electronic money transfers, financial planning, and basic accounting.

While it might seem a bit early to bring money into the life of a six-year old, it’s a long overdue counterbalance to the established influence of corporations on Canadian children. ‘Buy now, pay later’ has been the main lesson up to now as bank sponsored credit card companies ensnare young adults who don’t have the basic tools to know it doesn’t add up over time.

Here’s a lesson idea starting in grade one: if Emma has a monthly income of $5,000 and she spends $8,000 on her credit card in a month, how much does she have left? By grade two students should know Emma is $3,000 in debt, but over the next five years they should learn that interest on credit card balances can compound at a rate of 20 per cent annually and (using a basic interest calculation) by grade six that $3,000 debt is $7,465. If Emma ignores her debt and accumulates more, her life can be ruined.

History also tells us it’s more important than ever to teach children the positive side of compounding with early lessons on the importance of investing for retirement. Canadian retirement nest eggs have gone through a dramatic risk download over the past four decades as more employer pension plans shift the burden of managing market risk to their employees.

Going back to the 1970s, employers have been replacing defined benefit pension plans (DB) where payouts are guaranteed, with defined contribution pensions (DC) where pension contributions are invested in the financial markets at the discretion of the employee.

The shift from DB to DC pensions accelerated in the wake of the 2008 global financial meltdown as big employers like General Motors Co. struggled to survive. The shift is expected to continue for the next generation of retirement savers.

Not every student will become a Warren Buffett, but at least they will have a basic understanding that they may need a financial advisor, how to find one, and what to expect in terms of fees and services. Hopefully, the province of Ontario will learn from its own lessons and better regulate financial advisors so investors can make apples-to-apples comparisons.

Of course, it’s never too late for adults who want to be more financially literate. The Canadian Securities Institute (CSI) is a finance industry regulator that offers courses ranging from the basics to career accreditation.

Most banks and trading platforms offer tutorials on just about every aspect of trading. There are also plenty of unbiased websites that can explain finance and investing including one sponsored by the Ontario Securities Commission (OSC) called GetSmarterAboutMoney.ca.

Payback Time is a weekly column by personal finance columnist Dale Jackson about how to prepare your finances for retirement. Have a question you want answered? Email dalejackson.paybacktime@gmail.com. For specific advice, please consult a qualified financial advisor.