How to invest in 'the most disconnected stock market ever': Alicia Levine

After years of stress testing, financial companies might have been better positioned to withstand a market shock such as that triggered by the coronavirus. Instead, they’re standing out as persistent losers.

Down 29 per cent since January, banks and insurers have trailed the S&P 500 by 20 percentage points, their worst performance at this point of a year on record. Along the way, about US$1 trillion has been wiped off their market value, an amount that rivals the annual total of US$1.2 trillion seen at the depths of the global financial crisis.

While companies in economically-sensitive industries like energy have led the S&P 500’s two-month rebound, banks are stubborn laggards, held back by fears over everything from negative interest rates to dividend cuts and loan defaults. Despite those headwinds, some analysts are perplexed by the selloff. Bank profits are likely to take a hit, but the duration and magnitude pales in comparison to what happened in the 2008-09 meltdown, estimates show.

“Today, there’s a night-and-day difference for the banks,” Mike Mayo, an analyst at Wells Fargo & Co., said in a Bloomberg Television interview with Vonnie Quinn. By his count, banks have doubled the amount of equity on their balance sheets over the past decade and boosted liquidity by 50 per cent.

“They are more resilient than they have been for a generation, but they are still treated like it is 2008. That’s a mistake the market is making,” he said. 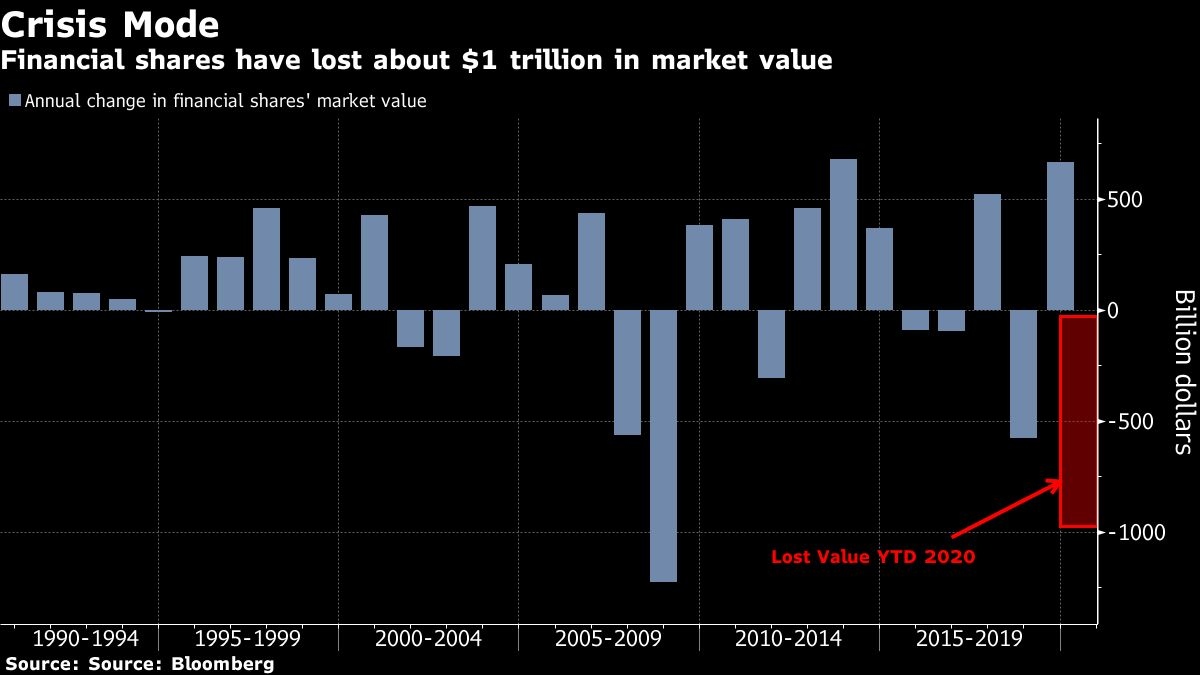 The trajectory of future profits also points to a less gloomy picture. Back then, earnings worsened for eight straight quarters, turning into a huge loss at the end of 2008. Now, analysts expect the industry to see profit declines last half as long, with losses spared.

None of this brings much comfort to investors who just spent 13 years nursing losses from the financial crisis and didn’t break even until last December. Banks trailed all major industries except energy when the S&P 500 tumbled into its fastest bear market in March. While beaten-down stocks have since bounced back, lenders and insurers remain as the second-worst performers.

The lousy returns on the way up contrast with past patterns, where financial stocks came out as front-runners during initial rallies from the last three bear markets. Sure, the March low may not hold, and financials’ unerperformance can be viewed as a signal that the worst is not over. Still, to some, their constant inability to keep up with the market is puzzling.

Dividend cuts may be a more immediate risk. After eight major U.S. banks agreed to suspend share buybacks through the second quarter to support clients during the pandemic, analysts have expressed concern about the safety of their dividends.

Morgan Stanley said Goldman Sachs Group Inc.’s dividend is most at risk in a bear case. Atlantic Equities downgraded Wells Fargo due to the looming specter of a lower dividend. Earlier this month, Fed Governor Randal Quarles said the Fed could curtail Wall Street banks’ ability to pay dividends by cranking up the amount of capital they need to maintain due to the pandemic.

On Thursday, Atlanta Fed President Raphael Bostic told CNBC that banks should be preserving as much capital as they can, and “need to think very deeply about the extent to which doing dividends or paying out dividends is going to be helpful.” He added that “I would hope that many of them decide that it is not exactly the best think at this time.”

Concern about dividends may be overblown, according to Tony DeSpirito, a portfolio manager at BlackRock.

“Monetary authorities have disavowed the idea of negative interest rates. We have held to zero as the lower bound and that’s a big deal for banks,” DeSpirito said in a Bloomberg TV interview with Jonathan Ferro. “When I look at the dividends, I think they are more safe and sound in the U.S. than in Europe.”

Dividends are probably “broadly safe” for 90 per cent of banks, and any cut may depend on the Fed’s annual stress test in June, KBW analysts led by Christopher McGratty wrote in recent notes.

At a time when growth stocks like technology are all the rage, it’s hard to get excited about banks, but their valuations make them a good bet on an economic recovery, said Brian Nick, chief investment strategist at Nuveen. At 1.1 times book value, the cohort is trading at the deepest discount to the S&P 500 since 2009.

“If there’s one area in value that we prefer, it is the banks,” Nick said. “We think if and when the economy gets rolling again — whether it’s the second half of this year or sometime in 2021 -- the valuations are extremely compelling.”