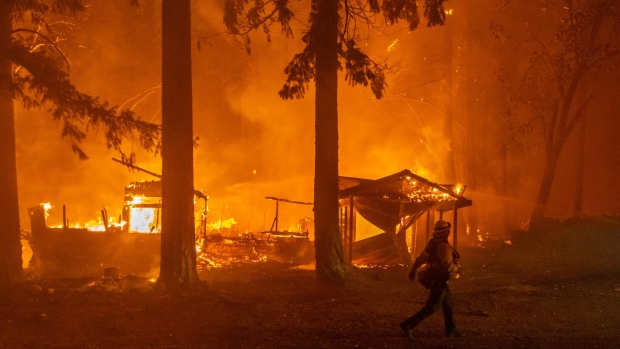 A firefighter monitors a fire as multiple structures burn in the Indian Falls neighborhood during the Dixie Fire near Crescent Mills, California on July 24. , Bloomberg

(Bloomberg) -- The largest wildfire in California is not only burning homes and forcing thousands to evacuate. It’s also destroying the value of a trust fund set up to compensate victims of past wildfires started by PG&E Corp.

Fire victims own nearly 25% of PG&E’s stock, which has lost about 8% of its value since the California utility giant said on July 18 it may have started the Dixie Fire that’s currently blazing in northern California. It’s the 14th largest in the state’s history, having charred more than 200,000 acres and burned 38 structures. It is 23% contained.

Victims of past fires blamed on PG&E equipment agreed in bankruptcy court last year to settle claims against the utility for $13.5 billion with half of that amount paid in cash and the other half in company stock. The value of the 478 million shares held by the fire victims trust sunk to as low as $4.16 billion on Monday, or about $2.5 billion less than the value promised during the bankruptcy settlement.

“It’s really unfortunate,” said Will Abrams, a 2017 wildfire survivor who opposed PG&E’s plan to compensate victims in stock. “I’m very disappointed that victims have really been taken advantage of in this situation.”

PG&E shares closed at a 12-month low of $8.75 on Monday after falling for three consecutive sessions. They bounced back as much as 3% Tuesday.

“We’re focused on continuing to deliver safe and reliable energy to our customers, and implementing needed changes across our business to improve our operations for the long term,” PG&E said in a statement.

Some attorneys for fire victims criticized the stock settlement at the time, saying that it left their clients vulnerable to the risk of PG&E starting another big fire that would reduce the value of their shares. California officials have been bracing for a severe wildfire season due to a punishing drought that has parched much of the state.

The fire victims trust has yet to sell its PG&E stock holdings. The trust has paid about $436.4 million to more than 15,000 fire victims as of June 30, according to a report issued earlier this month.

“The trust’s financial and legal advisors remain steadfast in their commitment to monetize the PG&E shares in an efficient and rational manner so as to achieve optimal distributable value for the fire victims,” according to a statement from the trustee report on July 8. The trust didn’t immediately return a request for comment.

To get to the full settlement value, victims need PG&E’s stock to climb nearly 60% to about $14.12 a share.