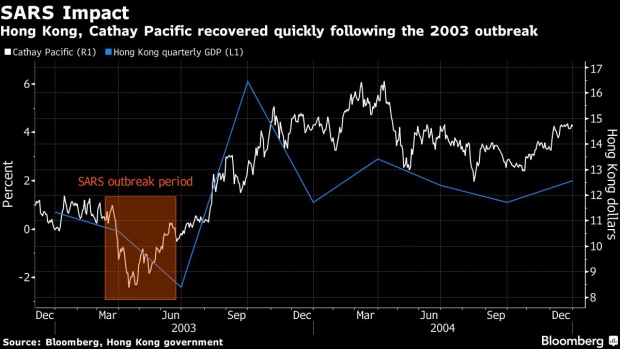 (Bloomberg) -- As investors look for guidance on how to tackle the emergence of a new virus from China, analysts suggest looking back to lessons learned from the aftermath of the 2003 SARS epidemic.

While the immediate impact of that outbreak was devastating in terms of the human cost, as well as on the economy and financial markets, in epicenters such as Hong Kong the rebound was almost immediate.

“This event will cause some short-term disruptions on stocks under our coverage, but as soon as the epidemic is under control, we believe they will be back to normal,” Baoying Zhai, an analyst with Citigroup Inc., wrote in a Monday note. “On China airports and airlines, we think there could be a similar pattern to the SARS period, with some lagged decline of passenger traffic, especially given this is happening during the Spring Festival transit.”

Back then, shares of Hong Kong-based Cathay Pacific Airways Ltd. tumbled almost 30% from December 2002 to April 2003, before almost doubling through the next year after the crisis ended. SARS pushed Hong Kong’s economy into recession in the first half of 2003 before it rebounded significantly.

Still, Chinese airlines will get some near-term support with the Lunar New Year holiday period beginning at the end of the week, with many going back to their homes. Beyond those “must needs,” general travel demand will decline and put further pressure on the sector in the near term until authorities get the disease under control, the Citi analyst said.

The bond market also suggests investors remain confident in the longer-term outlook. The yield spread on Asian-dollar corporate bonds fell to 223 basis points on Monday, the lowest since May 2019, according to an ICE bond index.

Another potential wrinkle: Chinese delivery services could get a lift as people may choose to stay home and shop online rather than going out, Citi said.

Anne Ling and Kerith Chen, equity analysts with Jefferies Financial Group Inc., note that travel and consumer stocks listed in Hong Kong are being sold off because of their dependence on customer traffic, according to a report Monday.

Assuming a SARS-like impact on Hong Kong as the worst-case scenario, the analysts forecast:

Hong Kong is very small and compact, so news will hit consumers “significantly and quickly,” the analysts said. Declines in shares of supermarket operator Sun Art Retail Group Ltd., now down 13% over two days, might be unwarranted as a result, they added.

“Should the current outbreak turn out to be as bad as SARS in Hong Kong, retail sales in affected cities will also be affected,” they said. “But once the outbreak is under control, the recovery should be fast.”

To contact the editors responsible for this story: Christopher Anstey at canstey@bloomberg.net, Cecile Vannucci, Kurt Schussler