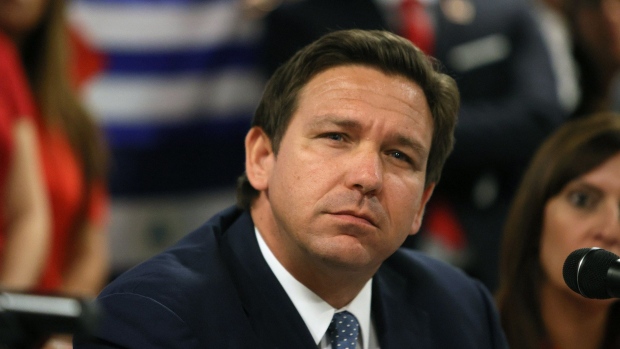 MIAMI, FLORIDA - JULY 13: Florida Gov. Ron DeSantis takes part in a roundtable discussion about the uprising in Cuba at the American Museum of the Cuba Diaspora on July 13, 2021 in Miami, Florida. Thousands of people took to the streets in Cuba on Sunday to protest against the government. (Photo by Joe Raedle/Getty Images) , Photographer: Joe Raedle/Getty Images

Less than a week after the Republican governor threatened to withhold state funding to school districts that require masks, two schools are backing down on such mandates. Broward County Public Schools reversed its masking rule, which the school board mandated just a week prior, in an effort to comply with the governor’s executive order that schools should leave masking decisions to parents, according to a statement Monday. Gadsden County School District had also planned a mask requirement for the coming year, but has reversed the order, according to WTVT in Florida.

“Parents can choose how they want to equip their kids for going to school,” DeSantis said Tuesday in response to a reporter’s query on the spreading delta variant. “We believe parents have that right. I think the White House tried to say I prohibited parents from making that decision – it’s just the opposite, we’re empowering them.”

DeSantis’s order on Friday leaves the decision on whether students should wear masks to parents. If the State Board of Education determines a district is unwilling or unable to comply with the order, the board can “withhold the transfer of state funds, discretionary grant funds, discretionary lottery funds, or any other funds” until the district complies with the law.

Many school districts in Florida are scheduled to begin classes on Aug. 10, and almost all public schools will open before the end of the month, according to the state. DeSantis’s directive conflicts with the U.S. Department of Education, which highlights the Center for Disease Control and Prevention’s guidance ​​for universal indoor masking for all teachers, staff, students, and visitors to K-12 schools, regardless of vaccination status.

State sources make up nearly 40% of Florida school funding, so there could be a “severe negative credit impact” if funding is withheld, according to Tom Kozlik, head of municipal research & analytics at Hilltop Securities.

Kozlik said withholding state funds from school districts will act as a deterrent for districts that may want to institute a mask mandate or policy. “Withholding aid is probably a policy that has the most teeth,” he said in an interview. “It creates this dynamic that any school doesn’t want to upset their relationship with the state.”

Florida’s Covid-19 rates are among the worst in the country, according to CDC data.