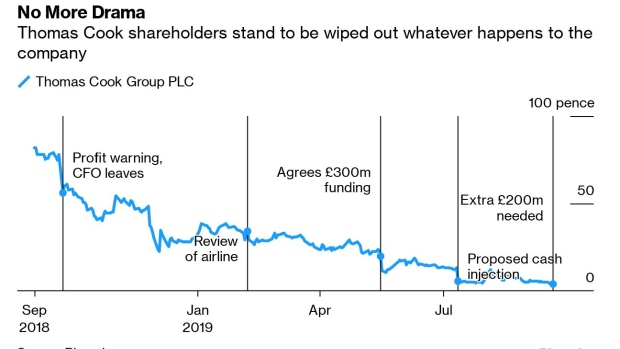 (Bloomberg Opinion) -- Off for a bit of late summer sunshine? I hope you didn’t book with Thomas Cook Group Plc. The struggling British tour operator is in last-minute discussions with lenders to try to stave off a collapse because of a funding shortfall of 200 million pounds ($250 million).

A company failure would be disastrous for half a million holidaymakers. Bondholders would suffer heavy losses too if Thomas Cook agrees to swap its debt for equity, as has been proposed. Administration might be even worse as debt-owners could get nothing. It’s less of a drama for equity investors. They’ll probably be wiped out either way.  The shares fell as much as 28% on Friday to a fresh low of 3.2 pence before recovering slightly.

Repatriating Thomas Cook’s customers would be a massive logistical operation. It would be embarrassing for the company and the U.K. government as about 150,000 of those affected would be Brits.

Royal Bank of Scotland Group Plc is one of the lenders demanding that Thomas Cook finds another 200 million pounds in backup financing facilities before they will take part in a proposed 900 million pound capital injection intended to safeguard the company’s future. That rescue deal is being led by China’s Fosun Tourism Group, Thomas Cook’s biggest shareholder.

Unless a solution is found soon, we may be confronted by TV pictures of crying babies and angry pensioners, complaining about their struggles to get home from their late summer break. As such, the company will want to avoid a collapse at all costs. As well as its worried customers, Thomas Cook employs 21,000 people and has 560 U.K. shops.

Its options are limited, though.

Finding someone to fund the shortfall is one possibility. Yet Fosun, which has agreed to contribute half of that 900 million pounds of rescue funds in return for 75% ownership of Thomas Cook’s tour operator and 25% of its airline, might be reluctant to stump up more. Selling off assets is another potential way out for the British company, which can trace its history back to 1841. However, big disposals are unlikely given the agreement to transfer those stakes to Fosun.

The best hope is persuading RBS and the other lenders to back down on their demands, enabling the financial rescue to go ahead. But that’s a long shot too. The banks have seen Thomas Cook’s funding requirement balloon this year as its trading weakened, and they want reassurance that it can make it through the less busy winter period.

Fosun could conceivably pick up Thomas Cook’s tour operator on the cheap after a collapse. But the damage would be so great to the brand that there may not be much point by then. While another rival such as Germany’s Tui AG might cherry pick some assets, it would be one of the beneficiaries of Thomas Cook’s demise anyway.

Tui has had its own problems after the grounding of its Boeing  737 Max fleet. But the company has its own hotel and cruise ship brands, leaving it in a stronger position than its troubled rival. With capacity coming out of the market in the event of the Thomas Cook’s collapse, it would be even better placed.

The same can’t be said for any customers left stranded if Thomas Cook can’t find the answer to its funding problems soon.