Big part of the inflation we are experiencing comes from food, shelter and energy: Strategist

Food prices climbed closer to a record high, giving consumers and governments around the world an even bigger inflation headache.

A United Nations gauge of global food prices rose 1.2 per cent last month, threatening to make it more expensive for households to put a meal on the table. It’s more evidence of inflation soaring in the world’s largest economies and may make it even harder for the poorest nations to import food, worsening a hunger crisis.

Prices have jumped for multiple reasons: bad weather hurt harvests, higher shipping rates, worker shortages and an energy crunch hit supply chains, and fertilizer costs have surged too. While it typically takes a while for commodity costs to trickle down to supermarkets, the rally is evoking memories of spikes in 2008 and 2011 that contributed to global food crises. 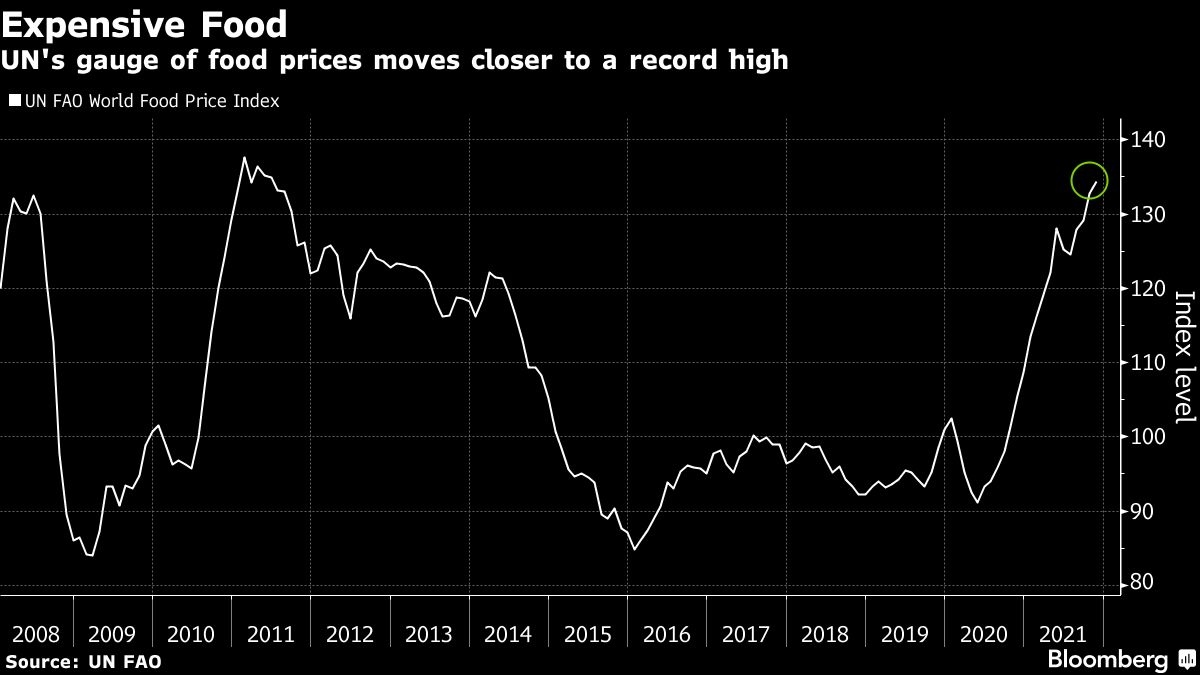 “This is obviously bad news for consumers,” said Abdolreza Abbassian, a senior economist at the UN’s Food and Agriculture Organization.

November’s push higher was mainly driven by grains and dairy, while prices of vegetable oils and meat declined, the FAO said in a report Thursday.

Higher food prices are pressuring consumer budgets that have already been strained by the COVID-19 crisis and high energy costs. It’s looking likely that shoppers will feel the effects of inflation for months to come as economies re-open in the wake of the pandemic.

That’s creating a policy dilemma for central banks over how fast to dial back stimulus measures. This week, Federal Reserve Chair Jerome Powell said its next meeting should discuss whether to wrap up bond purchases a few months sooner, and retired the word “transitory” to describe high inflation.

While food prices are unlikely to collapse any time soon, tighter monetary policy and concerns about the spread of the omicron coronavirus variant will probably put the brakes on the rally as “the market is anticipates a slowdown in demand,” Abbassian said.

Still, the long-term outlook remains uncertain as high fertilizer costs and the potential for any bad weather to hurt crops may restrict food supplies, he said.

The FAO last month said the world’s food-import bill should climb even more than expected to a record this year because of high staple and freight costs. A particular worry is that import costs in poor countries are rising faster than those in developed economies, something that’s becoming a growing problem in regions that rely on shipping in supplies.

Officials in areas like North Africa -- one of the world’s top grain importers -- and Turkey are already facing difficulties shielding citizens from costly food. Elsewhere, Serbia is capping the price of some staples including milk and flour to curb price increases.