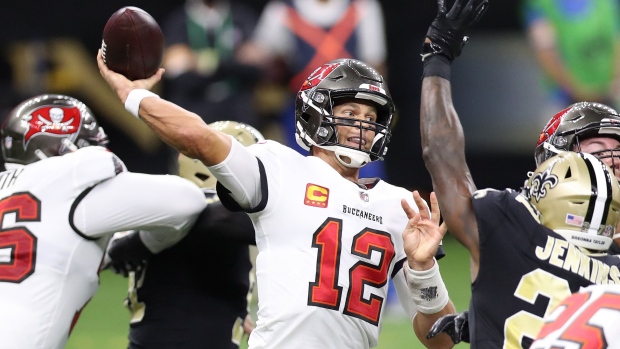 (Bloomberg) -- TV audiences slumped for the first weekend of the National Football League season, with the exception of a Sunday matchup on Fox featuring longtime New England Patriots quarterback Tom Brady with his new team, the Tampa Bay Buccaneers.

That game drew 25.8 million viewers, the highest opening weekend for the Fox Corp.-owned network in four years. Brady, who led the Patriots to six Super Bowl victories, lost 34-23 to the New Orleans Saints in his debut as a Buccanneer.

Other networks saw their audiences shrink. Comcast Corp.’s Sunday night game on NBC between the Dallas Cowboys and the Los Angeles Rams in the latter’s new stadium delivered an audience of 19.6 million, down 14% from the year before. ViacomCBS Inc. attracted an average of 13.6 million viewers to its Sunday coverage, including the Patriots versus the Miami Dolphins, down 12% from a year earlier.

The Covid-19 pandemic has led more pro football teams to play without live audiences, which can detract from the excitement. The league has also had to compete with others not normally playing this late in the year, including the National Basketball Association playoffs, and cable TV news that includes election coverage and the wildfires on the West Coast.

Monday Night Football viewers on Walt Disney Co.’s ESPN tumbled 18% to 10.8 million. The Pittsburgh Steelers dominated their game with the New York Giants, while last year featured a dramatic matchup between the New Orleans Saints and the Houston Texans.