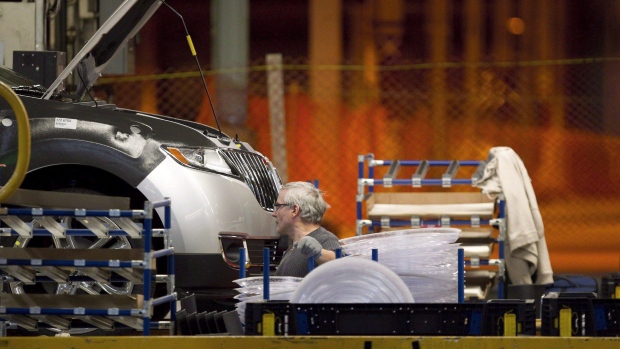 A line worker works on a car at Ford Motor plant in Oakville, Ont., on Friday, January 4, 2013. , The Canadian Press

OAKVILLE, Ont. -- Ford Motor Co. says it will cut about 200 jobs at its Oakville, Ont. plant starting in September as sales of some models slow.

"We have a long-standing practice of matching production with consumer demand. As a result, we are making changes to the operating pattern at Oakville Assembly Complex," said company spokeswoman Kelli Felker by email.

The company said sales of its Ford Flex SUV and Lincoln MKT crossover are slowing, while it will no longer sell the Ford Edge SUV in some European markets.

The Oakville plant, which produces the three vehicles, along with the Linclon MKX crossover, employs about 4,600 people.

Unifor Local 707 president Dave Thomas said in a message to members earlier this week that the union had tried to avoid the production slowdown that will lead to the layoffs.

"We have been arguing as a Local for the past several weeks trying to persuade the company from somehow avoiding this scenario but to no avail."

He said the shift restrictions coming in August, which includes cutting five units per hour from the production line among other schedule changes, will lead to the September cuts with possibly more coming in January. Thomas said in the message that the union had been expecting 185 jobs to be cut.

The Ontario government said it was working to support the auto industry through its Driving Prosperity program, and stands with the workers affected.

"We are disappointed to learn of Ford's decision to issue layoff notices to workers at the Oakville Assembly Complex," said Robert Gibson, spokesman for Economic Development Minister Vic Fedeli.

He said the ministry of training, colleges and universities has been in contact to offer support to the affected workers, but that Ford has told the government it has made its own arrangements to assist those losing their job.

The cuts come as the Canadian auto market has seen 16 months of consecutive sales declines and the industry contends with a sharp drop in sales in China and slowing sales in the United States.

The crossover and SUV type vehicles produced at the Oakville plant have fared much better than passenger cars, but are still seeing sales slow. The auto industry is also struggling to fund the massive investments needed to prepare for next-generation technologies like electric cars and automation.

Ford said at the end of June that it would cut some 12,000 jobs in Europe as it streamlines its operations. The company had previously said it was closing six plants in Europe.