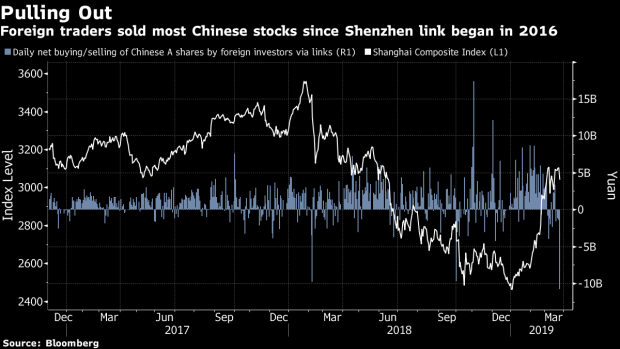 (Bloomberg) -- Foreigners dumped the most Chinese shares on record via stock trading connects as they steered away from risk and the country’s benchmark index fell below a key level.

Overseas investors net sold 10.8 billion yuan ($1.6 billion) of mainland shares Monday, the biggest single-day sale since the second exchange link with Hong Kong opened in December 2016, according to data compiled by Bloomberg. The Shanghai Composite Index joined a global rout on growth concerns, sliding 2 percent to close below the 3,100-point level it has been trying to overcome this month.

“Investors tend to be more risk-averse after recent data showed signs of economic slowdowns in major economies,” said Ben Kwong, a Hong Kong-based executive director with KGI Asia Ltd. “They’d sell high-risk assets such as Chinese equities. Some investors would lock in profits after such a big rally to avoid uncertainties.”

Even after Monday’s loss, the Shanghai Composite Index is up 22 percent this year, the best performing major index worldwide.

Foreign investors have had a history of successfully timing exits. The last two times they dumped a similar amount of Chinese shares via the exchange links, the Shanghai gauge dropped at least 7 percent over the following days.

To contact Bloomberg News staff for this story: Amanda Wang in Shanghai at twang234@bloomberg.net;Jeanny Yu in Hong Kong at jyu107@bloomberg.net

To contact the editors responsible for this story: Richard Frost at rfrost4@bloomberg.net, Magdalene Fung, Will Davies