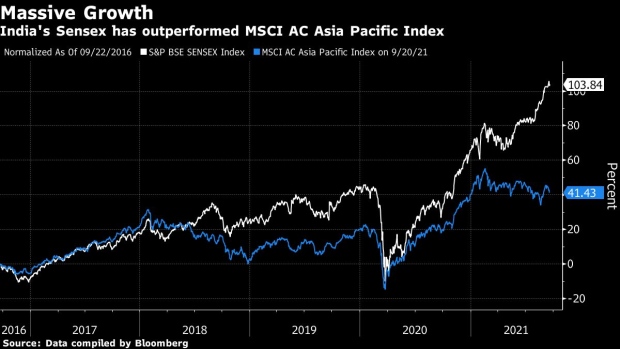 (Bloomberg) -- India should put off a plan to shorten settlement of stock transactions as it raises the risk of default by local brokerages and dims the country’s allure to global investors, a lobby group said.

Capital market regulator, Securities and Exchange Board of India, has announced a proposal to allow stock exchanges to offer next-day settlement in some stocks starting early next year instead of the two-day or T+2 settlement practiced in most markets including the U.S.

“To change any operational systems and processes to accommodate T+1, I don’t think it’s possible to do it in three months. We think there should be a formal consultation so that all stakeholders will have an opportunity to discuss their issues and come up with a solution,” Eugenie Shen, managing director and head of the asset management group at Asia Securities Industry and Financial Markets Association said in a video interview this week.

The plan, once implemented could push foreign investors, who account for about a fifth of the India’s market capitalization, to not only upgrade their custodial arrangements but also spend more on foreign exchange charges and other costs. That could prompt some of thems to pull out funds from the South Asian nation where the benchmark S&P BSE Sensex has returned an annualized 14.7% over the past five years in U.S. dollar terms, beating the broader MSCI Asia Pacific Index by more than three percentage points.

“You also have to be realistic about the operational challenges and the risks that it brings,” Hong Kong-based Shen said. ASIFMA, whose members include BlackRock Inc., has already made a number of representations to SEBI, but is yet to hear back.

Last week, SEBI Chairman Ajay Tyagi said a shorter settlement cycle will be implemented in a phased manner with the exchanges deciding on the timeline. The move has been prompted due to an improvement in technology, payment systems and banking arrangements, he added. A SEBI spokesperson was not immediately available for comment.

Shen said investors based in the U.S. and Europe, who account for about 60% of the $655 billion of foreign investment in India, have to manage an entire chain of market participants spread across various time-zones. The new rules mean foreigners face higher cost of currency conversions as India allows investments only in rupees.

Shorter trade cycle also poses a risk of settlement failures for local brokerages. Time-zone differences can create failures in trade-matching, which may result in the settlement obligation being borne by the domestic broking houses, raising the risk of default.

“Such a change may make India’s capital markets less attractive to global investors, if they have to pre-fund their transactions,” she said, adding that India lacks other infrastructure support such as extension of temporary financing by custodians or a workable securities borrowing and lending regime that can help minimize the risk of settlement failures associated with a short cycle.

The group wants to have discussions with Reserve Bank of India to deal with forex related issues.

“We need all the parties around the table to talk discuss the issues and collectively come up with solutions, if we want to migrate safely to a T+1 settlement cycle,” Shen said.