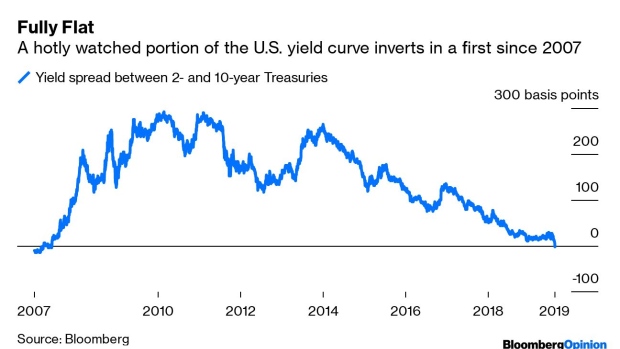 (Bloomberg Opinion) -- The $16 trillion U.S. Treasuries market is sending an ominous sign about the future of interest rates, inflation and economic growth, both in America and across the world.

And no, I’m not talking about the inverted yield curve.

While it’s true that the spread between two-year and 10-year Treasury yields turned negative on Wednesday for the first time since 2007 — yet another indicator of a potential recession over the next 12 to 18 months — that’s not what should be standing out to investors. After all, the curve from three months to 10 years — the Federal Reserve’s preferred measure — has been inverted at just about every point since late May, and some parts of the curve inverted as early as December. So it’s not as if this latest one came out of nowhere. Short- and long-term yields have always been on a collision course.

Rather, the most noteworthy development in the world’s biggest bond market might just be that the yield on 30-year Treasury bonds fell Wednesday to 2.0139%, the lowest level ever. It surpassed the previous mark of 2.0882% set in July 2016, when investors rushed to havens in the aftermath of the U.K.’s vote to leave the European Union. This time around, a one-two punch of weak economic data from China and Germany pushed investors toward long-dated Treasuries.

At first glance, it seems as if a haven bid is afoot. That’s true, to an extent. But, crucially, it’s important to recognize that the longest-maturity Treasuries are leading the rally. The benchmark 10-year U.S. yield, by contrast, is still about 30 basis points away from its record low. This suggests something beyond just a flight to quality.

Consider the duration of the long bond compared with shorter-maturity notes. The effective duration of a 30-year Treasury is about 21 years, while it’s about 8.7 years for a 10-year Treasury. That means that if yields rose across the curve by 1 percentage point, owners of 10-year notes would suffer an 8.7% loss.

That’s pretty bad. But it’s nothing compared to the long bond, which in that scenario would lose a staggering 21%, meeting the usual definition of a bear market. Even if 30-year yields just rose back to the level they were at two weeks ago, it would mean double-digit losses for anyone who purchased them on Wednesday.

In fact, for bond traders, 30-year Treasuries might just be the riskiest part of the debt market because they can usually be whipsawed by a change in global economic conditions or the outlook for inflation. The prospect for steep losses only intensifies the lower the yield falls.

However, this relentless rally at the long end shows that bond traders have completely let go of all fear of rising interest rates, stronger-than-expected economic growth or a sustained rebound in inflation. That should be as nerve-wracking to investors as the prospect of a global economic recession. After all, there’s a playbook for dealing with a downturn and an inverted curve. There’s no historical guide to sovereign debt yields across the world trading at, near or below zero.

Another reason that the move in 30-year yields is so striking is because it’s the exact part of the curve over which the Fed has the least control. Buying long bonds now isn’t so much a wager that the central bank will aggressively cut its key lending rate as it is a bet that monetary easing will prove ineffective in fostering growth and inflation.

The most obvious and benign explanation is that investors see $15.8 trillion in negative-yielding debt worldwide, plus mounting geopolitical risks and an undercurrent of weakening economic data, and conclude that the longest-dated Treasuries are a way to lock in maximum yield and safety. That certainly seems plausible. On top of that, market depth is weak even by August standards, which might be exacerbating some of the moves.

As always, breaking records is one thing, but following through in the days ahead is arguably even more critical. Once a key level is broken in the Treasuries market, there’s usually high trading volume in the liquid futures market amid a rush to hedge or close positions, and Wednesday was no exception. Bloomberg News’s Edward Bolingbroke reported that some “real money” investors stepped in to sell once the 30-year yield hurtled toward 2%. So there might yet be some resistance.

The inverted curve, both in the U.S. and U.K., will undoubtedly stoke questions about the near-term risk of a recession and put the pressure on Fed officials and other global central bankers to swiftly ease monetary policy. But even if the American economy avoids a downturn, a low-growth, low-yielding world for decades is an equally scary proposition.