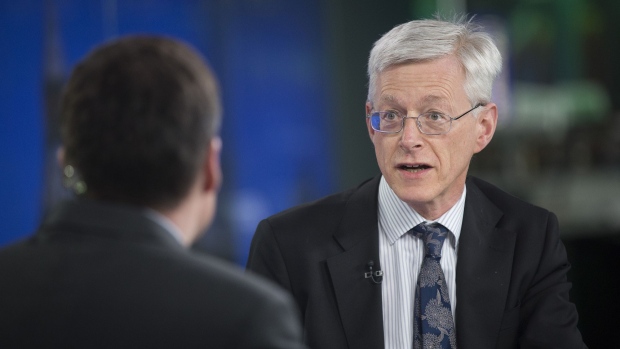 Martin Weale, a member of the Monetary Policy Committee at the Bank of England, speaks during a Bloomberg Television interview in London, U.K., on Thursday, April 18, 2013. U.K. Chancellor of the Exchequer George Osborne's March 20 budget statement clarified the BOE's right to useunconventional tools to stoke growth and said it should examine the case for forward guidance on the future path of policy. , Bloomberg

(Bloomberg) -- Former Bank of England policy maker Martin Weale said the UK government’s radical tax cutting plan to boost growth will “end in tears” with a run on the pound.

Weale, who previously served on the UK central bank’s Monetary Policy Committee and as director of the influential National Institute for Economics & Social Research, said stimulus for the economy at a time when inflation is running near its strongest in 40 years will end in a crisis.

Asked whether Kwarteng would deliver his target of 2.5% annual GDP growth, Weale said, “Past history suggests not.”

“Other experiences where the chancellor has gone for growth ended in tears,” Weale said on Bloomberg Television. “I expect the same sort of thing will happen with Kwarteng’s policy. There will probably be a clear run on the pound, and then the bank will be forced to put up interest rates to stabilize the exchange rate.”

The King’s College economist spoke after the BOE raised rates a half point to 2.25% and signaled that it would act “forcefully” if it saw signs of domestic inflation building. Markets had been looking for a three quarter point rise and expect rates to reach 5% by summer next year.

Weale said he would have voted for a three-quarter-point increase in the benchmark lending rate if he still sat on the panel. He’s the second former BOE policy maker this week to warn about the risks of the financial package.

Dartmouth College economist Danny Blanchflower said on Twitter that Truss’s package was in “total disarray” suggested investors should short the pound. The two economists come from different ends of the spectrum, with Blanchflower one of the BOE’s more dovish members and Weale known for hawkishness.

Weale drew comparisons with the Barber Boom of the early 1970s, when the government set a 5% annual growth target that overheated the economy and led to soring inflation, and the 1976 crisis when the UK was rescued by a loan from the International Monetary Fund.

He also criticized the economic models used by central banks to anticipate inflation.

“The problems is that the sort of models that central banks have used for the last 10 years proved no good at anticipating the persistence of inflation we have got at the moment,” Weale said.