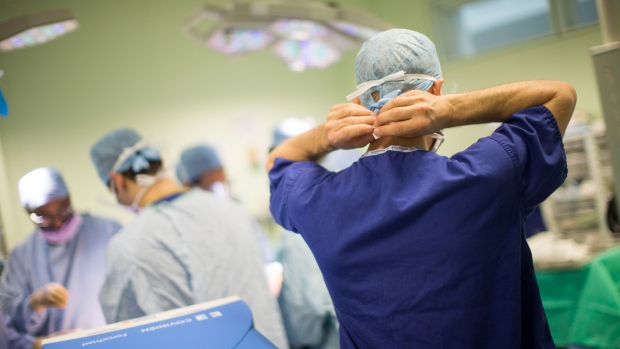 A member of medical staff secures his face mask inside a operating theater at a hospital in Birmingham, U.K. , Bloomberg

A Labour-commissioned study published Thursday rejected the idea of a French-style cap on work time. Instead, economist Robert Skidelsky said the aim should be to reduce hours for public-sector employees to 35 per week in a decade, through a policy of investment in automation and efficiency.

He also called for guaranteed public jobs or training and the reinstatement of full employment as policy goal, to remove the “reserve army” of unemployed workers which he said has helped subdue wages. The government could use its own procurement leverage to promote automation and lower hours in the private sector, he said.

Labour’s economy spokesman John McDonnell said the measures will be submitted for discussion as the party rewrites its manifesto in anticipation of an election which could be called as soon as November.

The offer of a better work-life balance may prove appealing to voters, who on average labor for 42.5 hours each week -- one of the longest in Europe. The decline in time spent working since the Industrial Revolution ground to a halt in the 1980s. Had it continued to fall in line with the post-World War II trend, it would currently be at around 34 hours, according to research by the New Economics Foundation.

To contact the reporter on this story: Lucy Meakin in London at lmeakin1@bloomberg.net

To contact the editors responsible for this story: Paul Gordon at pgordon6@bloomberg.net, Andrew Atkinson, David Goodman