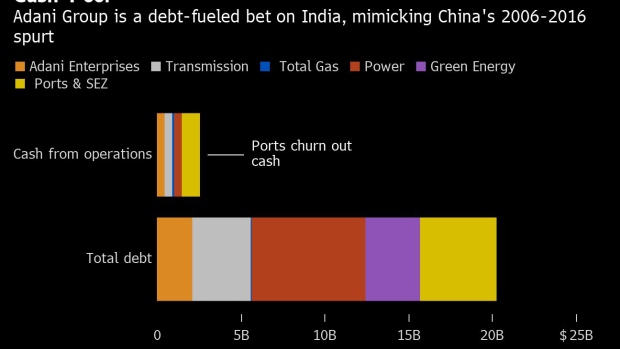 (Bloomberg) -- Four Mauritius-based funds that have attracted attention for parking almost all their money in companies controlled by Indian billionaire Gautam Adani have a history of investing in firms which ended up defaulting or were investigated for wrongdoing.

Before they put about 90% of their $6.9 billion under management in the Adani empire, the funds -- Elara India Opportunities Fund, Cresta Fund, Albula Investment Fund and APMS Investment Fund -- held significant stakes in two companies whose founders fled India and have since been probed for money laundering, another that went bankrupt, and a fourth that was liquidated after sparring with the Ethiopian government.

Because the funds are registered in the tax haven of Mauritius, their ownership structure is opaque. Cresta, Albula and Elara have been subject to at least one probe for alleged round-tripping, Firstpost website reported in 2018. This is a process illegal under Indian rules where money is transferred typically to a shell company before being returned, giving the impression the funds originate from a clean source. Indian authorities struggled to identify who ultimately controls the money, according to the report.

Some lawmakers are now seeking an investigation into whether the Mauritius funds are being used as a shell for Adani’s own money. Mahua Moitra, an opposition lawmaker and former investment banker, questioned the ultimate ownership of the funds in parliament last week, saying that the information should be public given the Adani group holds stakes in strategic Indian infrastructure like ports, airports and power plants.

“We want to know whose money is it,” Moitra said in a text message to Bloomberg News. “If it is Adani’s money, then minority shareholders are being screwed. If it is not, then which foreign actors have so much say in our strategic assets?”

In a written reply July 19 to Moitra’s questions posed to parliament, India’s junior finance minister Pankaj Chaudhary said neither the funds nor Adani firms are being investigated by the Enforcement Directorate, the Indian agency that probes serious financial crimes like money laundering and round-tripping. Some Adani group companies are being examined by the capital markets regulator Securities and Exchange Board of India for compliance with securities rules as well as by the department that looks at import and export taxes, Chaudhary said without elaborating, and cited rules that forbid him from disclosing any income tax investigations.

Chaudhary also disclosed names of people registered as responsible for each of the funds. Bloomberg couldn’t find contact details for Markus Beat Dangel, Anna Luzia Von Senger Burger, and Alastair Guggenbuchi Even and Yonca Even Guggenbuehl, identified in the response to parliament as controlling or otherwise responsible for Cresta, Albula and APMS, respectively. Raj Bhatt, chairman and CEO at Elara Capital who was also identified in the response to parliament, didn’t respond to a message on LinkedIn.

A representative for the Adani group said by phone the group cannot comment on foreign portfolio investors. “We have always been fully compliant with applicable SEBI regulations, we have made full disclosure to SEBI on specific information requests from them in the past,” the representative said by email. “However, we have not received any communication or information requests recently.” The Adani Group’s Chief Financial Officer had told CNBC-TV18 in June that the funds have been investors for more than a decade and their holdings in group companies are the result of demergers.

The funds rank among the biggest shareholders in Adani group companies, ahead of prominent financial institutions like BlackRock Inc. and The Vanguard Group Inc. BlackRock didn’t respond to a request for comment on whether it was aware of the Mauritius funds’ track record and whether it had concerns about its holdings in companies whose other investors are being questioned in parliament. “The securities in question are constituents that make up a very small portion of indices tracked by highly-diversified Vanguard index funds,” a Vanguard representative said by email. “The mandate of an index fund is to track its benchmark, not make active investment decisions about the underlying constituents.”

The funds were also among the largest foreign shareholders in Winsome Diamonds and Jewellery Ltd., Sterling Biotech Ltd., Ruchi Soya Industries Ltd. and Karuturi Global, companies they previously invested in that went bankrupt or are being investigated.

Unusually intertwined, the funds themselves have a history of acting in lockstep: investing and exiting at the same time and sometimes acquiring holdings of the exact same stake size, down to the decimal place, according to public filings of the companies they invested in.

Two of the funds, APMS and Albula, are registered at the same address in Port Louis, Mauritius, while Cresta is registered to an address on the same street. Elara India is also registered in Mauritius.

Mauritius has long been a favored investment route into India due to the ease of registering firms and a low tax rate. The two nations have a treaty to avoid double taxation. It isn’t appropriate for the regulator to disclose information pertaining to any investigation, a representative for the Mauritius Financial Services Commission said by email, adding that the FSC has a robust supervisory framework to safeguard public interest and foster investor confidence.

India’s banks and government declared Winsome’s majority owner, Jatin Mehta, a willful defaulter and economic fugitive in 2018 over an unpaid loan of about $900 million in today’s value. Mehta’s whereabouts are unknown and India is investigating him for alleged money laundering and round-tripping. Winsome had denied the round-tripping allegations in 2014.

A similar story played out with Sterling Biotech, whose controlling shareholders, the Sandesara brothers Nitin and Chetan, fled India after defaulting on loans. They are being investigated for alleged money laundering and round-tripping. India’s Enforcement Directorate was examining Elara India, Cresta and Albula as part of the Sandesara investigation to identify the ultimate beneficiary of the money, the Firstpost website reported in 2018, without saying where it got the information. A spokesperson for the Enforcement Directorate didn’t respond to calls.

Karuturi’s land lease was canceled in 2015 by Ethiopia’s Agriculture Ministry, which alleged that the company failed to adequately develop its plot. Karuturi was the world’s largest rose grower at that time. While Karuturi had challenged the action and sought compensation, it was pushed into liquidation earlier this year with creditors claiming a total of 18.2 billion rupees.

The funds’ focus on Adani assets is renewing speculation about who’s backing them. Their investments have coincided with a rally in the companies’ shares in recent years, at one point giving Gautam Adani the world’s fastest-rising wealth and putting him a mere $6 billion behind Mukesh Ambani, Asia’s richest person.

Cresta has the biggest exposure to Adani companies with 99% of its investments in flagship Adani Enterprises Ltd. and Adani Transmission Ltd. Albula has 89.9% of its holdings invested in Adani companies, while the other two funds have over 95%.

The funds held no stake in Adani Green Energy Ltd. or Adani Total Gas Ltd. when the firms listed in 2018, but now hold a combined 6% and 10%, respectively. Adani Power Ltd. and Adani Ports & Special Economic Zone Ltd. are aberrations: Elara has cut its stake by 8% from 2016 in Adani Power, which has doubled in value, while none of the funds have a significant position in the group’s oldest listed firm Adani Ports, whose stock value has doubled.

The ports-to-power-plants Adani empire is cash-poor and relies on external debt to fund its operations and expansion, according to Shumi Akhtar, associate professor of finance at the University of Sydney. The growth in the companies’ value has given Adani leverage to pull off aggressive acquisitions like buying SoftBank Group Corp.’s renewable power business in India with an enterprise value of $3.5 billion, and stakes in four ports around the country for $1.2 billion in recent months.

“Adani’s sudden and sustained increase throughout 2021 has been attributed to increasing investment by foreign funds,” said Akhtar. “When foreign funds are invested in a company, it acts as a positive signal to the market because foreign investors are viewed as having an information advantage over domestic investors and thus, are better able to pick long-term winning stocks.”