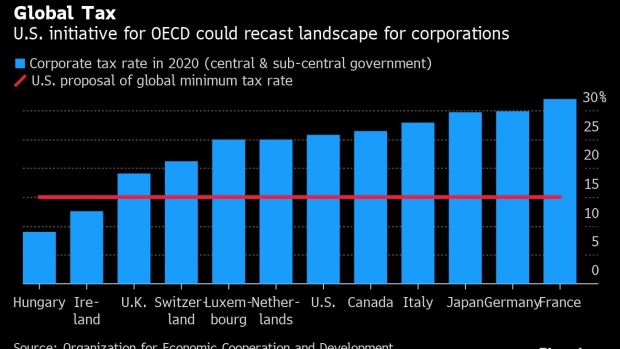 A tour guide wearing a face shield speaks to a group outside Bath Abbey and the roman baths in Bath, U.K., on Monday, July 5, 2021. The U.K. is in a race to vaccinate the population against the fast-spreading delta variant quickly enough to be able to lift social-distancing curbs and reopen more businesses on July 19. , Bloomberg

Global finance chiefs signaled alarm over threats that could derail a fragile recovery as they concluded a meeting that sought to start reshaping the post-crisis economic order.

New variants of the coronavirus and an uneven pace of vaccination could undermine a brightening outlook for the world economy, according to a communique agreed on Saturday by Group of 20 finance ministers at a gathering hosted by Italy in Venice. They resolved to keep up support for growth to ensure recoveries can continue to take hold.

Officials also endorsed a global accord to make multinationals pay more tax in places where they operate, and to set a minimum corporate rate, though their talks exposed ongoing tensions. They recognized the role of carbon pricing in tackling climate change for the first time, but with no consensus on when to achieve net zero emissions.

The G-20’s uneasy outlook underscores how its immediate challenge remains steering the world out of the worst crisis in living memory even as longer-term matters such as rewriting a century-old tax system or environmental concerns fill its agenda.

“The biggest risk remains Covid,” Philip Hildebrand, vice chairman of BlackRock and a former president of the Swiss National Bank, told Bloomberg Television on Friday. “We need to accelerate vaccines, administer them, and I think very importantly, also think about the developing countries.”

The delta variant, first spotted in India and now spreading across the world, is emerging as a new threat after more than a year of crippling lockdowns. While the U.S. and Europe are enjoying strong recoveries as vaccinations spread, other places are lagging, such as India and South Africa.

Those contrasting trajectories weighed on the minds of ministers at their first physical meeting since the pandemic struck last year.

“The recovery is characterized by great divergences across and within countries and remains exposed to downside risks, in particular the spread of new variants,” said the ministers and central bankers.

Their sentiment reflected a creeping worry among advanced-world finance officials that extraordinary stimulus measures combined with the most ambitious health response of the postwar era might still be insufficient to consign a crippling emergency to history.

Just last week, San Francisco Federal Reserve President Mary Daly told the Financial Times that “one of the biggest risks to our global growth going forward is that we prematurely declare victory” against the coronavirus.

Finance ministers were also given a stark warning before their meeting from International Monetary Fund chief Kristalina Georgieva, who sought to emphasize some of their challenges.

“The world is facing a worsening two-track recovery, driven by dramatic differences in vaccine availability, infection rates, and the ability to provide policy support,” she told them in a blog article.

Aside from recognizing the dangers, finance ministers also sought to make progress on outstanding issues that could shape the post-pandemic era, with mixed results.

Amid the breakthrough on carbon pricing, a push by European nations for more ambitious language about cutting net greenhouse gas emissions to zero by 2050 was thwarted by countries more reliant on fossil fuels, according to people familiar with the matter.

Meanwhile a global revamp of corporate tax agreed between 132 countries -- including all members of the G-20 itself -- was given another endorsement pending talks aimed at a finish in October. The change would impose a global minimum rate and allow governments to capture more revenue from multinationals in their jurisdiction.

“The world is ready to end the global race to the bottom on corporate taxation and there’s broad consensus about how to do it,” U.S. Treasury Secretary Janet Yellen said after the meeting.

Even there however, some issues remain unresolved. On Monday, Yellen will discuss her concerns that a proposed European Union digital levy might undermine the global tax deal, in a meeting with finance ministers from the region.

One missing element from the communique regarded a proposed redistribution of $100 billion in IMF Special Drawing Rights to aid poorer African nations. While that measure was was endorsed by the Group of Seven last month, the G-20 only specified support for a general reallocation of $650 billion in SDRs sought by the IMF board.

Despite the prominence of analysis on global economic prospects, officials didn’t say much about inflation threats either. That’s all the more remarkable because many central bankers present have separately specified the mounting risk of a consumer-price shock.

“We are also going to move into a higher inflation regime,” Hildebrand said. “It will take some time to settle, so I don’t think we should pay attention to the very short-term numbers, but inflation will move higher as we go through this transition phase.”