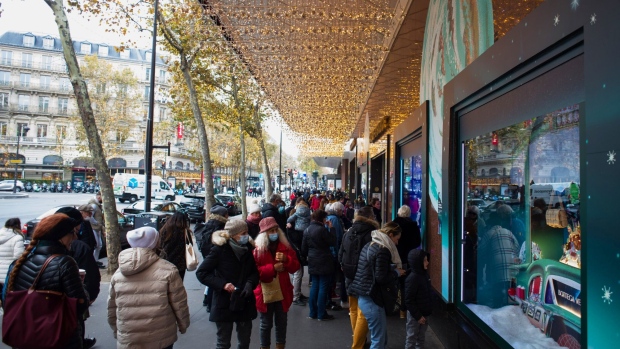 (Bloomberg) -- France said it has detected nine cases of the omicron variant, even as President Emmanuel Macron’s government steps in with fresh promises to support the country’s hard-hit tourism industry.

Cases of the new coronavirus variant were found in different parts of France and in the overseas territory of La Reunion, and the country is stepping up efforts to identify and isolate them as soon as possible, health authorities said in an emailed statement on Friday.

Omicron has probably been circulating in the country “for a few weeks,” French Health Minister Olivier Veran said in an interview on FranceInfo radio, adding that the government is accelerating its booster campaign and will review possible new restrictions on Monday. He declined to elaborate.

France’s government has once again gone into crisis mode, with Veran and other ministers warning about a new wave that’s hitting the country more strongly than expected in spite of a high level of vaccination. The new wave “is rising fast,” Veran said.

Macron, who faces re-election next year, also has an eye on the tourism sector, which had just started to recover before the emergence of the new virus strain. The government is speaking to industry representatives to determine where help is needed following a slight slowdown in reservations over the last 10 days, Junior Tourism Minister Jean-Baptiste Lemoyne said.

“We’re not here to abandon them,” Lemoyne said in an interview on France 2 television. “We are looking for where the needs are. Tourism is a national priority.”

France will do everything to avoid stricter Covid-19 measures but lockdowns remain “a tool” should the situation worsen drastically, Jean-Francois Delfraissy, who heads the scientific council advising the government, said in an interview on RMC radio on Thursday.