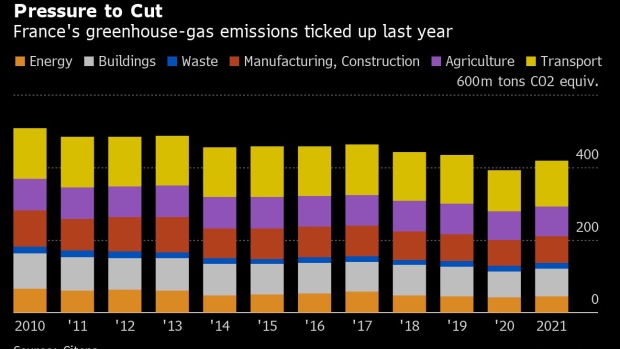 A report from the High Council on Climate pointed to inadequate efforts across multiple sectors from agriculture to transport. The broad sweep of its recommendations underscores the challenges faced by governments as they seek to balance climate commitments with an urgent need to ensure stable supplies of energy, food and materials amid soaring prices.

“France’s response to global warming is making progress, though remains insufficient,” the council said in the report released late Wednesday.

Under a climate package recently adopted by the European Union to accelerate the shift away from fossil fuels, France will have to slash net emissions by 54% from 1990 levels by 2030. That means an average annual cut of 4.7% over the rest of this decade -- twice as deep as the reductions seen since 2010, the HCC report showed.

In recent years, France has introduced measures to boost the use of electric cars and heat pumps and improve building insulation. It has worked to curb the use of gas and fuel oil for heating and subsidized emission-reduction programs for manufacturers, while expanding solar and wind energy generation.

Yet its emissions jumped 6.4% last year -- albeit remaining below pre-Covid levels -- as the economy rebounded from the pandemic. With the government now battling soaring inflation as the war in Ukraine roils markets, it faces a tough task to step up climate efforts while containing costs for consumers.

An official in Prime Minister Elisabeth Borne’s office said this week that the government will propose measures sector by sector by September in order to achieve the 2030 emissions target. It also plans to update the country’s energy road map in a bill to be discussed in Parliament next year, the official said.

The report’s recommendations include: