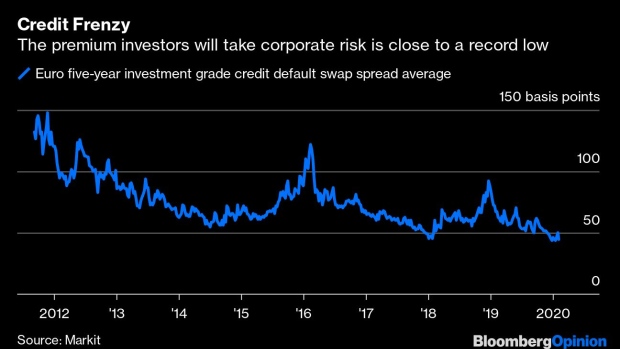 (Bloomberg Opinion) -- Bernard Arnault, the boss of LVMH Moet Hennessy Louis Vuitton SE, exceeded even his own incredibly low yield expectations in his company’s giant bond sale this week — which included the biggest corporate issue in euros since 2016. The luxury giant raised 7.5 billion euros ($8.3 billion) and 1.55 billion pounds ($2 billion), over a range of maturities from two to 11 years, to help finance its $16 billion purchase of Tiffany & Co.

Two of the five euro tranches were placed at negative yields, meaning investors are paying single A-rated LVMH to borrow money. Arnault’s expectations back in November for yields from the sale of “between 0% and 1%” have been surpassed. Even the 11-year tranche has a coupon of just 0.45%. M&A has never been cheaper.

France’s richest man can thank the European Central Bank for this state of affairs. The restart of its 189 billion-euro Corporate Sector Purchasing Program has driven credit spreads ever lower. While the central bank wants to lessen the funding costs of European companies — and local subsidiaries of global firms — to make it easier for them to invest, it may not have been meaning to help a French luxury behemoth snap up an American jewelry icon.

It’s almost certain that a bond of this size will have been bought by the ECB (or will be picked at some point in the near future). Often the bank takes up to 20% of eligible issues, and there has a been a real paucity of high-quality credit since the Quantitative Easing program kicked back into life.

There was another jumbo corporate sale in Europe this week by U.S. Media giant Comcast Corp., which issued notes worth 3 billion euros and 1.4 billion pounds. This type of sale is known as a “reverse Yankee,” where an American company issues debt, but not in dollars. Maybe we could refer to LVMH’s use of dirt cheap funding in its home currency to buy an American company as a “reverse, reverse Yankee.” The world of finance is ever flexible.

International Business Machines Corp. also pulled off a bumper bond deal in Europe earlier in the week; the euro credit market is truly open for business. Although January was a record month for issuance, it was dominated by financials and sovereign, supranational and agency (SSA) issuers. Credit spreads have now also moved close to their tightest ever levels, amid the general flight-to-quality sparked by the Coronavirus outbreak.

It’s just a shame that most of these jumbo deals are being used to refinance existing operations more cheaply — rather than spurring an investment boom, or local European mergers and acquisitions that would help the continent’s moribund corporate environment. Still, the ECB is doing what it can; if the financing heads over the Atlantic sometimes, that’s the price you pay for the ocean of quantitative easing that’s been made available. No wonder corporates everywhere are filling their boots.