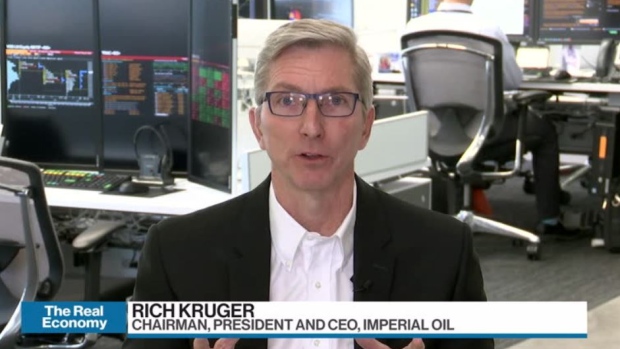 “We really are confident that [with] a further relaxation of the constrained volumes, that now’s the time,” Imperial CEO Rick Kruger told BNN Bloomberg in a Friday interview. “The market can absorb that increased oil production without the risk of the blowout of price differentials that occurred late last year.”

Kruger said he believes the market can do the same work that curtailments could, adding that he’s never been a fan of the cutbacks.

“We have not liked curtailment from the beginning because we think free markets work,” Kruger said. “We think trade risks are introduced and we think government intervention affects investor confidence,” he added.

One of the results of the curtailments has been an uptick in crude-by-rail movement, and Imperial – which has invested in a rail terminal adjacent to its Edmonton facility – said it would be interested in helping take on some of the province’s rail contracts while the industry awaits approval and construction of added pipeline capacity.

“We do support the [provincial] government getting out of the rail business. We think the industry, in a properly-incentivized market will invest and build rail capacity.”

Imperial released its second-quarter results on Friday, boasting income and revenues that both topped analyst expectations.

Kruger added that he found the National Energy Board’s Friday decision to approve construction at three major Trans Mountain expansion facility sites “encouraging,” adding that it’s critical that shovels get in the ground.

“Now we need to follow through and to ensure that gets built,” he said. “That’s how you have an integrity in the country and in the regulatory review process and those will be huge steps to once again restoring investor confidence in our country that I have seen – over the last several years – have been significantly eroded.”

“My primary message is: Let’s get it done.”