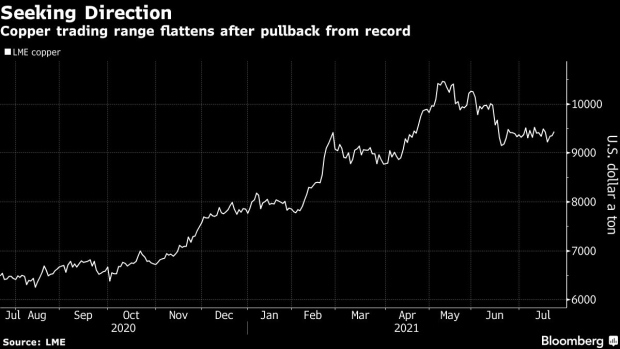 (Bloomberg) -- Freeport-McMoRan Inc., the top publicly traded copper miner, produced less than expected last quarter, offering a boost to prices of the metal that had retreated from record highs.

The Phoenix-based company reported second-quarter output of 913 million pounds, trailing the 961 million-pound average estimate among analysts. While Freeport reiterated its annual sales forecast and output is well above year-ago levels, copper sales came in below Freeport’s own projection due to the timing of shipments.

The copper market is banking on Freeport ramping up underground production in Indonesia to meet demand that is rising as nations recover from the pandemic and economies shift to low-carbon energy sources, which use more of the metal. While prices have eased from a record in May amid renewed concern over the pandemic, Chief Executive Officer Richard Adkerson sees the market supported by strong long-term demand and a dearth of big new projects.

Freeport said progress of underground production at its flagship Grasberg mine “continues to advance on schedule,” according to a statement Thursday.

High prices and rising production fueled a surge in Freeport’s profit in the quarter, with adjusted earnings coming in at 77 cents a share compared with consensus of 76 cents. The company said it cut net debt to its targeted levels, setting the stage for an increase in shareholder returns and investments in future growth.

On a call Thursday, investors will be eager for an update on Freeport’s evaluations of future growth projects such as an expansion of El Abra in Chile. Freeport said in the earnings statement that while it continues to evaluate an expansion at El Abra, it is also “monitoring potential changes in government fiscal matters in Chile and will defer major investment decisions pending clarity on these matters.”

Rising production costs are seen as one of the few headwinds to earnings growth. While the second-quarter net copper cash cost of $1.48 a pound was higher than it had forecast due to non-recurring labor charges in Peru, the company expects the annual average to come back to $1.35.

The company’s shares have more than doubled in the past year in one of the best performances among copper suppliers tracked by Bloomberg Intelligence. In pre-market trading Thursday, the stock was down slightly from Wednesday’s close.

Freeport is scheduled to hold a conference call at 10 a.m.