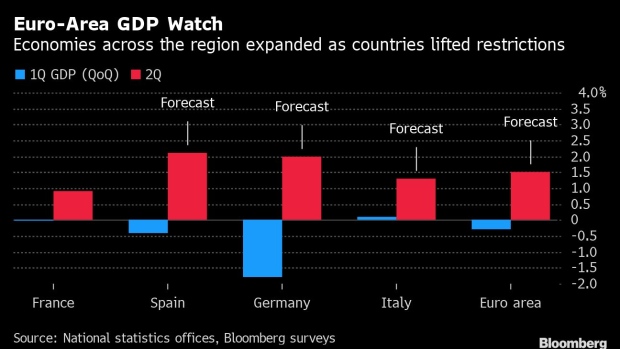 Pedestrians cross the Gran Via in Madrid, Spain, on Thursday, July 29, 2021. Spain is on track to be one of the fastest-growing economies among developed countries as the post-pandemic recovery accelerates, according to Prime Minister Pedro Sanchez. Photographer: Angel Navarrete/Bloomberg , Bloomberg

(Bloomberg) -- The French economy returned to growth in the second quarter at a pace that is set to accelerate over the summer as the government continues with plans to lift nearly all Covid-19 restrictions.

Output in the euro area’s second-largest economy rose 0.9% in the three months ending June despite a strict lockdown in April to contain a resurgence of cases and relieve pressure on hospitals. Consumer spending growth accelerated and corporate investment expanded as the restrictions had less impact on activity than during previous outbreaks. Economists polled by Bloomberg expected 0.8% GDP growth in the period.

Separate reports later Friday are expected to show the euro area as a whole recorded a much stronger performance as other member countries lifted restrictions sooner. France is set to catch up in the third quarter with real-time indicators and confidence surveys showing the economy has enough vim to meet the government’s forecast of 6% growth this year.

France’s performance in the second quarter was domestically driven as trade had a slightly negative impact on output with import growth outpacing that of exports.

Statistics agency Insee also revised up the first-quarter GDP figures to show a stagnation rather than the slight contraction previously reported. That revision means the country narrowly avoided a recession -- seen as two consecutive quarters of contraction -- after a slump in the final months of 2020.

Surveys indicate the economy will strengthen further with consumer confidence above its long term average in June and July and sentiment in manufacturing at the highest level in more than three years.

Yet there are risks weighing on the outlook after a recent increase in new Covid cases due to the spread of the delta variant. In an attempt to avoid renewed lockdowns, the government is raising pressure on French people to take vaccines by making proof of inoculation mandatory for a growing number of activities such as dining out and going to the cinema.

There is also growing evidence that France is hitting supply constraints as businesses struggle to find workers and source some raw materials. According to the Bank of France’s latest survey, 44% of companies are reporting hiring difficulties.

Coming Up (all times CET)