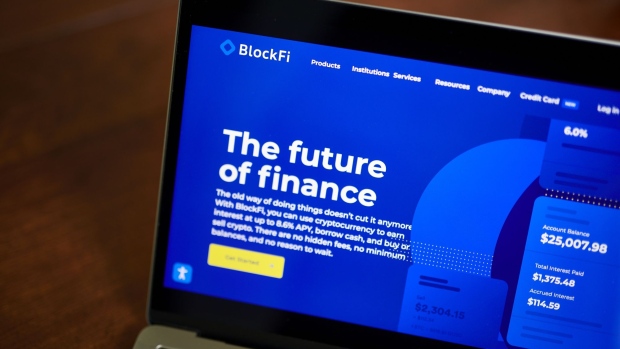 (Bloomberg) -- FTX, the digital-asset exchange co-founded by Sam Bankman-Fried, is nearing an agreement to buy BlockFi Inc. after extending a credit line to the beleaguered crypto lending platform, according to people familiar with the matter.

CNBC reported earlier that FTX is paying roughly $25 million and that a term sheet is almost complete, citing unnamed sources. Zac Prince, chief executive officer of BlockFi, responded in a tweet, saying “I can 100% confirm that we aren’t being sold for $25M.” Prince didn’t comment in the tweet whether BlockFi was in acquisition talks.

That price tag would represent a deep discount from BlockFi’s $3 billion valuation in March 2021. In early June, it sought to raise money at a reduced valuation of about $1 billion. BlockFi is among those affected by a liquidity crunch in the industry and the troubles at Three Arrows Capital. It had acknowledged that it liquidated a large client that failed to meet its obligations on an overcollateralized margin loan, without naming the client.

Earlier this month, FTX agreed to provide a $250 million revolving credit facility to BlockFi. Bankman-Fried has been acting as a lender of last resort for some troubled crypto companies and has also provided credit lines to Voyager Digital Ltd., which is exposed to bad debt by Three Arrows.

Based in Jersey City, New Jersey, BlockFi recently cut headcount by 20%, and its executive team, including founders Prince and Flori Marquez, took a pay cut due to market conditions.

A FTX spokesperson said it will not be commenting on the matter. A spokesperson at BlockFi referred to Prince’s tweet when asked about the deal talks.