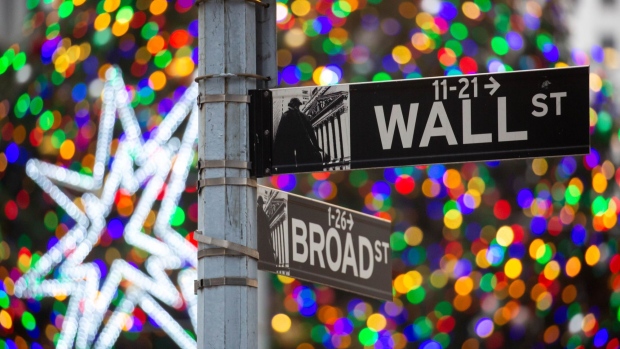 A Wall Street street sign in front of the New York Stock Exchange (NYSE) in New York, U.S., on Friday, Dec. 31, 2021. U.S. stocks swung between gains and losses, with moves exacerbated by thin trading on the last session of the year. Photographer: Michael Nagle/Bloomberg , Bloomberg

It’s unclear how much in fees the banks will generate but they’re guaranteed a big payday should the deal close. Broadcom’s bankers will also reap fees from providing $32 billion in financing.

No boutique banks were listed on the press release, another win for the big banks, which have faced competition on advisory credit from independent firms in recent years.

There’s a 40-day go-shop period built into the deal, so there’s a chance for other banks to get involved with a rival bidder for VMware, should that materialize.

While mergers have been down this year compared to last year’s blockbuster streak, technology has been on a tear, including landmark transactions such as Elon Musk’s takeover of Twitter Inc. and Microsoft Corp.’s deal for Activision Blizzard Inc.