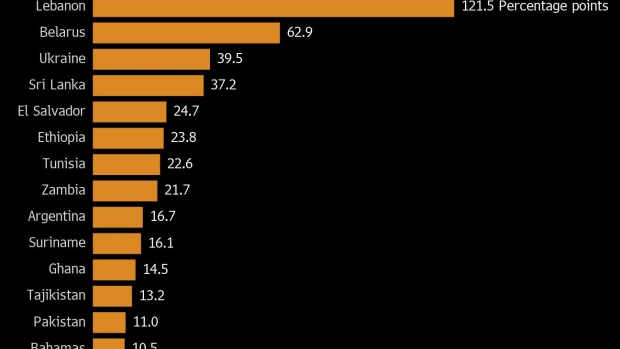 (Bloomberg) -- Group of Seven finance ministers called out China in a statement that urged creditor countries to help developing nations struggling with debt.

“It remains essential that all relevant creditor countries including non-Paris Club countries, such as those, like China, with large outstanding claims on low-income countries facing debt-sustainability challenges, contribute constructively to the necessary debt treatments,” officials said in a communique Friday following two days of meetings near Bonn, Germany.

The larger G-20 grouping of developed and emerging nations has formed a so-called Common Framework meant to streamline the process of organizing creditors to act jointly to address issues among struggling debtors. It’s along the lines of the Paris Club, a decades-old forum for debt workouts involving official lending.

The project has taken on increased importance as higher interest rates in the developed world, a strengthening dollar and slowing global growth have made conditions more difficult for highly indebted countries.

Officials from some advanced democracies have expressed frustration that China has been slow to participate in the debt-workout process. Beijing’s involvement is crucial because China has become the No. 1 official lender to developing countries in recent years.

“It is important that China is expressly encouraged to contribute” to help manage the crisis in emerging markets, German Finance Minister Christian Lindner, the host of the gathering, said Friday in a post-meeting press conference.