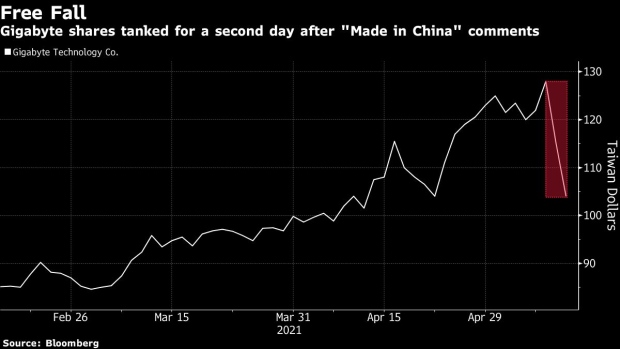 (Bloomberg) -- Gigabyte Technology Co. has become the latest international business to face a boycott in China after its comments about shoddy Chinese-made goods prompted an online furor and its removal from e-commerce sites.

Shares of Gigabyte, which makes motherboards and graphics cards alongside gaming laptops, sank by the daily limit for a second day, diving 10% in Taipei on Wednesday. Gigabyte has lost roughly $550 million in market value after the firm published a post on its website that claimed it differed from other unnamed brands that chose to outsource to Chinese contract manufacturers in a “low-cost, low quality way.”

The remarks sparked an outcry on Chinese social media and prompted e-commerce operators like JD.com Inc. and Suning.com Co. to remove product listings of the firm. Searches for “Gigabyte” or “Jijia”, its Chinese brand name, on the platforms returned no results as of Wednesday morning. Gigabyte has since removed the original post and published an apology on Tuesday, saying that the earlier statement was “seriously inconsistent with the facts” and that it’s proud of the quality of “Made in China” products.

Gigabyte is only the latest business to run afoul of a more assertive China and its 1.4 billion consumers. Hennes & Mauritz AB, Nike Inc. and Adidas AG were among brands that were boycotted for their stance on the treatment of Muslim Uyghurs in Xinjiang, while Lotte Group and other South Korean corporations took a sales hit after China objected to its neighbor’s 2016 decision to deploy a U.S. missile defense system.