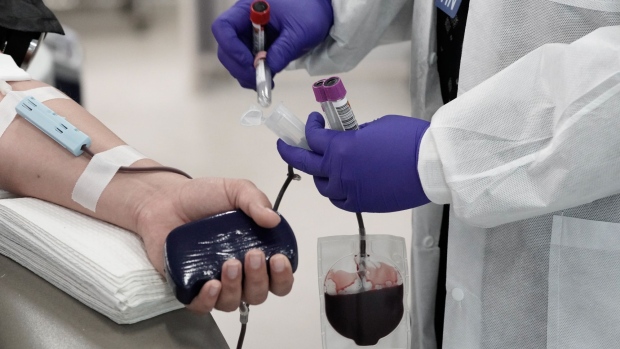 A registered nurse (RN) draws blood from a volunteer during a San Diego Blood Bank drive in the parking lot of SDCCU Stadium in San Diego, California, U.S., on Thursday, April 9, 2020. California this week declared its independence from the federal government's feeble efforts to fight Covid-19 — and perhaps from a bit more. , Bloomberg

(Bloomberg) -- When it comes to blood donations, the U.S. should reassess the three-month deferral period for men who have sex with men, Democratic Representative Alexandria Ocasio-Cortez said.

The omicron surge led to a decline in blood donations, causing a national blood crisis. Other countries moved in the direction of individual risk-based assessment for potential donors, and the Food and Drug Administration should consider similar steps, she said.

“In light of the urgent crisis facing America’s blood supply, we urge FDA to take immediate action to reassess the existing three-month blanket deferral period for gay and bisexual men,” Ocasio-Cortez and other lawmakers said in a letter to FDA. “So that every person who can safely donate blood in the United States has the opportunity to do so.”