General Electric Co. headed for its biggest plunge in a decade after a prominent financial analyst working with a short seller accused the company of an “accounting fraud.” GE Chief Executive Officer Larry Culp called the claims “market manipulation -- pure and simple.”

Harry Markopolos, who had raised concerns over investment manager Bernie Madoff before his fraud was exposed, said GE will need to increase its insurance reserves immediately by US$18.5 billion in cash -- plus an additional noncash charge of US$10.5 billion when new accounting rules take effect. GE is also hiding a loss of more than US$9 billion on its holdings in Baker Hughes, an oilfield services company, Markopolos said.

The allegations complicate Culp’s efforts to regain investor trust following years of strategic missteps and stock declines at GE. Since taking the helm in October, he has sought to reduce risk in the finance operations, fix the power-equipment unit and stanch the flow of bad news that erased more than US$200 billion from GE’s market value in the two-year period ending Dec. 31.

The shares plunged 11 per cent to US$8.08 at 3:09 p.m. in New York, on track to close at the biggest drop since March 2009. The slide triggered a trading restriction on short-sellers that takes effect when a decline exceeds 10 per cent. GE had climbed 24 per cent this year through Wednesday, following a 57 per cent plunge in 2018.

GE dismissed Markopolos’s allegations as baseless and defended its accounting. 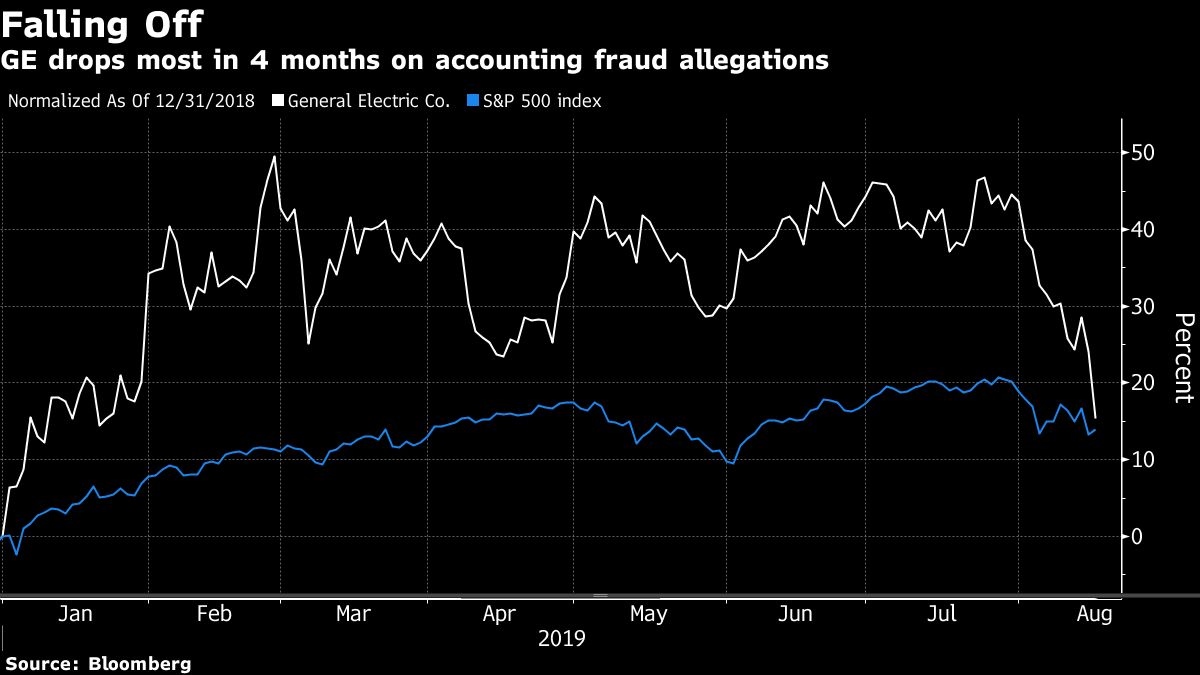 “The fact that he wrote a 170-page paper but never talked to company officials goes to show that he is not interested in accurate financial analysis, but solely in generating downward volatility in GE stock so that he and his undisclosed hedge fund partner can personally profit,” Culp said by email.

Board member Leslie Seidman, who chairs GE’s audit committee, said in the same statement that the analysis included “novel interpretations and downright mistakes” about accounting requirements.

Markopolos is working with a third party he didn’t identify and stands to benefit from bets that GE’s stock will decline. He and his colleagues are also seeking to collect a whistle-blower reward by reporting their findings to regulators. His analysis was reported earlier by the Wall Street Journal.

The financial analyst, who had worked for a rival investment firm to Madoff’s, wrote a book in 2010 about his efforts to expose the swindler. Markopolos now specializes in investigating possible fraud by companies.

GE’s response to Markopolos is marred by a “culture that historically hid losses and deceived investors,” said Scott Davis, an analyst at Melius Research.

“GE has no credibility at all in responding to the report today as inaccurate,” Davis said in a note to clients. “The truth is GE is using a set of assumptions, the short report uses another. We don’t know where the truth lies.”

A prominent short seller, John Hempton of Bronte Capital, dismissed Markopolos’s analysis as “silly.” While Hempton said “GE is a deeply problematic company,” he recommended that investors ignore the report.

To calculate the US$18.5 billion figure, Markopolos compared GE’s reserves for its long-term care insurance portfolio to those of Prudential Financial Inc.

The business has been difficult for virtually every company in the market. The policies, which emerged in their modern form in the 1980s, cover health-related costs that may not be paid by Medicare or standard health insurance, such as nursing home stays and visits by home health aides.

The products were undermined by faulty assumptions, such as how long people would live and how expensive their care would be. Meanwhile, insurers were burned by lower-than-expected returns on bond portfolios backing the obligations.

GE has said that the new insurance accounting standard, which it called a “complex change,” could “materially” affect its financial statements. The Financial Accounting Standards Board has announced new guidelines that would tweak how companies account for certain insurance contracts such as long-term care policies. The board has endorsed delaying implementation of the new standards by one year to 2022.

Last year, GE disclosed a US$6.2 billion charge tied to old insurance policies for long-term care. It also said its finance unit would pay US$15 billion over seven years to fill a shortfall in reserves.